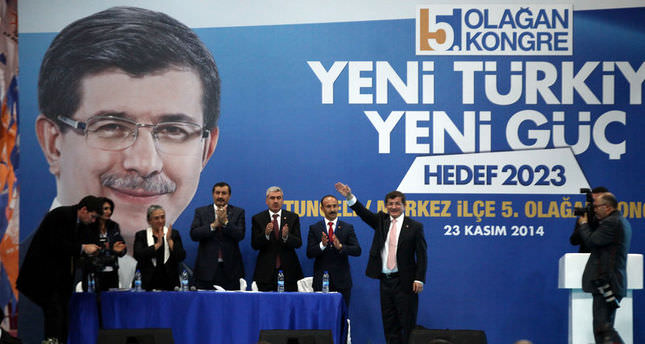 by daily sabah
Nov 23, 2014 12:00 am
Prime Minister Ahmet Davutoğlu paid official visits to the eastern cities of Erzincan, Ağrı and Tunceli. The focus of these visits is Ankara's goal of embracing different ethnicities and religious groups living in Turkey, the Kurdish reconciliation process, and the October 6-7 Kobani protests that morphed into violent clashes between pro- and anti-PKK groups who were accusing the government of not giving enough support to Syrian Kurdish fighters defending the besieged Syrian town of Kobani.

On Sunday in Tunceli, Davutoğlu highlighted that the Kurdish reconciliation process began with Justice and Development Party (AK Party) initiatives in 2012 and the government's Alevi opening that aims to tackle the Alevi community's long-held grievances, were on the agenda to build a bridge between the nation and state.

Davutoğlu went on to say that the People's Democratic Party (HDP) owes an apology to the nation following the party's call for street protests on October 6-7 in support of Kobani, which claimed dozens of lives. He made the comments at the AK Party's congress in the eastern province of Ağrı.

The HDP called for demonstrations on October 6 to protest attacks from the self-proclaimed Islamic State of Iraq and al-Sham (ISIS), and the lack of support from Ankara for Kobani. Ankara accused the HDP of causing the street violence that led the deaths of nearly 40 people across the country.

After several days of clashes between pro- and anti-PKK groups in southeastern Turkey, HDP Co-Chairman Selahattin Demirtaş held a press conference and rejected the allegations that his party and lawmakers had called for mass violent demonstrations, saying they called for unity and peaceful protests across the country to draw attention to halt the ISIS attacks.

In his visit to Erzincan, Davutoğlu made it clear once again that public order and the reconciliation process are not alternatives to each other.