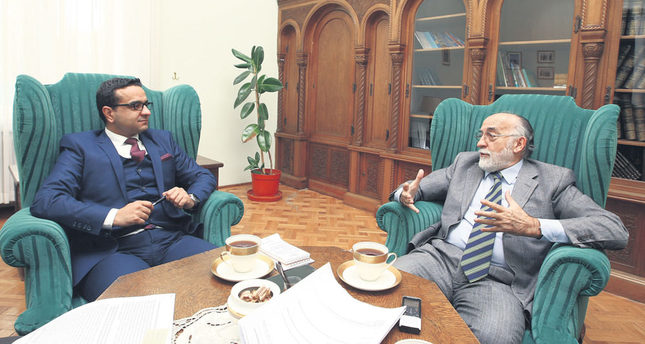 The Serbian envoy to Ankara Danilo Vucetic, in an exclusive interview with Daily Sabah, conveyed Serbia’s concern over the death of a Serbian basketball team’s supporter and said the perpetrator needs to be found as he commented on bilateral relations and regional issues

Turkey has historic ties with the Balkan region, and despite the fact that Turkey and Serbia have no common border, both countries consider each other neighbors. In the Balkan region, Serbia's contribution to regional stability is vitally important, and at the same time, the Turkish-Serbian relationship has reached quite a high level. Since last year, bilateral relations have witnessed some turbulence, but the latest signs indicate that black clouds are fading and bilateral relations are gradually getting "back on track."

Daily Sabah spoke to Danilo Vucetic, the Serbian ambassador to Turkey, who elaborated on the latest news in the countries' bilateral relations as well as regional politics.

DS: As you know, last Friday a supporter of the Serbian basketball club Red Star was stabbed to death before the team's EuroLeague basketball match with Galatasaray Liv in Istanbul. How would you evaluate this tragic incident? Do you think it will cause deterioration in the relationship?

DV: It's really a very sad and unfortunate tragedy, and we were quite preoccupied with what happened even before the match and during the match. One young Serbian fan lost his life as a result of a fight between supporters, and the Serbian public has exhibited great sadness because of the event. At this stage it's very important to see the result of the investigation, and we would like to get detailed information about what really happened before the match and during the match. There is one thing that I need to underline: Unfortunately some Turkish officials neglected the information that was provided by our Consular General in Istanbul concerning the sensitivity of the match. Following this tragedy, Turkish Prime Minister Ahmet Davutoğlu called our Prime Minister Vučić to express his condolences over the death. Moreover, the governor of Istanbul conveyed to me a letter of condolence from the Ministry of Foreign Affairs, and these are gestures of goodwill by Turkish officials. However, the Serbian public is really concerned about this issue, and therefore, we would like to see the result of the investigation and the perpetrator quickly found and punished.

Daily Sabah: In recent weeks we witnessed the first visit by an Albanian prime minister to Belgrade in 68 years. How would you evaluate this visit?

Danilo Vucetic: It is possible to say it was a historic visit, maybe not because of the concrete results, but we consider that it as a very important visit by an Albanian prime minister – the first after 68 years. Unfortunately, during the visit, Albanian Prime Minister Edi Rama made one political provocation by insisting, in the heart of the Serbian capital city of Belgrade, that Serbia should accept "reality" and recognize "the independence" of Kosovo and Metohija. He knows very well that our position is totally different; Serbia till now does not and will never recognize "the independence" of Kosovo and Metohija. Because of that, the response of our Prime Minister Vučić was very resistant and firm. I can say that it was another episode that shows how sensitive our relations are. Still, as I said, our goal is to gradually improve and develop relations with all neighboring countries, including Albania.

DS: What kind of course is Serbia following through the integration process into the EU?

DV: Full membership in the European Union is the strategic goal of the country's foreign policy. As you know, the Republic of Serbia achieved candidate status for membership in the EU in March 2012 and formally started its accession negotiations in January this year. We are currently in the "screening" stage, and we firmly believe that we will soon, next year, open some negotiation chapters. EU institutions assessed that Serbia has а strong administrative capacity in order to rapidly advance in the negotiation process toward full membership. Through the EU negotiation process, Serbia is trying to develop civil society and the state apparatus to strengthen the rule of law and democratic heritage, to modernize and develop the country as a whole and to improve regional cooperation. Our government is fully dedicated to these goals.

DS: After the Kosovo issue, how could the Russia-Ukraine crisis affect Serbia's integration process into the EU? Is Serbia really having difficulty in choosing between Russia and the EU?

DS: Do you think that Serbia has gained increased importance for Russia following the economic sanctions that the EU applied to Russia?

DV: As I said, we have always had very good relations with Russia, and we intend to keep it that way. If you ask me especially about economics, there are no signs of increased trade cooperation between Belgrade and Moscow, following EU sanctions. Our Prime Minister Vučić was clear: We will not motivate and stimulate our business people and economy to increase their activities with Russia, following the request sent to us by Brussels, but, at the same time, we will also not impose any sanctions on Russia and will maintain the existing level of cooperation.

DS: What does Putin's visit to Belgrade mean in this context if you were to examine it?

DV: We have strong economic, political, energetic, historical and cultural ties and relations with Russia. They support our position regarding the so-called "independence" of Kosovo, which we do not recognize, of course. The visit of President Putin had the aim to confirm our historic friendship and the level of bilateral relations between the two countries, as well as to mark a very important anniversary – 70 years since Belgrade was liberated in World War II from the Nazis.

DS: In 2009, the president of Turkey at the time, Abdullah Gül, visited Belgrade, which created a new era for Turkey-Serbia relations. These bilateral relations gained serious momentum. However, during the recent period, it is as if these relations have been declining. How do you interpret this?

DV: Yes, the visit of former President Gül was very important. And, yes, bilateral relations gained serious positive momentum. We had intensive political dialogue with Turkey and a number of agreements were signed, such as a visa-free agreement, a free trade agreement, etc. After the elections in Serbia in 2012, the new president, Tomsilav Nikolic, visited Turkey twice. And then, in late October last year, Prime Minister Erdoğan gave speeches in Prizren, Kosovo and Metohija. Afterwards we had, I would say, a standstill in relations. I think though, we have overcome the standstill, and we are gradually getting back on track. We both must invest further efforts to additionally improve our overall relations to strengthen mutual trust between us. We have a huge potential for it especially in the sphere of economy, trade and investment.

DV: The important thing is that it is always better to be sensitive and careful when it comes to sensitive issues for some countries. We all have those issues. We consider Kosovo and Metohija as an integral part of the Republic of Serbia, and we will never recognize a unilateral proclamation of its so-called independence. About the speech, I can only say that, obviously and unfortunately, it had caused some difficulties in our relations no matter how it was interpreted, but what is also important, as I said, is that the standstill is behind us and that we are back on the track; a positive atmosphere is again here. It took us both a while, as you can understand. Former Turkish Minister of Foreign Affairs and current Prime Minister Ahmet Davutoğlu visited Belgrade during spring this year to discuss how we could improve relations too. Of course Turkey can be, as you put it, "close to Serbia." As a continuation of political and other dialogue between two countries, Ms. Maja Gojkovic, the president of the National Assembly of the Republic of Serbia, is coming on a bilateral visit to the Republic of Turkey on Dec. 2, 2014, and we hope that our relations with Turkey in all fields would continue to develop after the visit.

DS: Does Serbia see Turkey as only an economic actor or does it have expectations from Turkey in different fields?

DV: Of course we do not see Turkey as only an economic actor. It is not even possible to see it like that; economy and politics usually go together and follow each other. Why we talk so much about economic cooperation with Turkey is because it never really followed political relations, and there is huge potential for economic cooperation between us. Not only that of course, we can cooperate in all other fields, such as culture, sports, youth, science, tourism, know-how, etc. We are already cooperating, but it can be deeper, richer and better for our mutual sake, benefiting the citizens of both countries. Let me use this chance to once more invite Turkish businesses to come and invest in my country.

DS: From this point on, is it possible to achieve more positive relations between Turkey and Serbia. What could be done to achieve this?

DV: Surely it is possible. No doubt at all. I've already mentioned which fields I see as areas where we can deepen our common work. Mutual trust, partnership, enhanced cooperation and win-win situations are, I am convinced, in our mutual interest.
Last Update: Nov 24, 2014 9:49 am