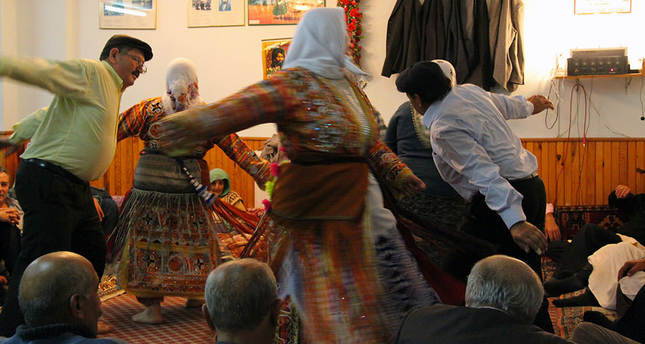 by daily sabah
Nov 25, 2014 12:00 am
As the government takes steps to tackle the long unresolved Alevi issue in Turkey, Alevi workshop coordinator Necdet Subaşı said on Monday that even though Alevis in Turkey have felt safer with secular political discourse for a long time, this perception has started to fall apart recently. "Alevis are not motivated by any parties and they also reject being a backyard for any specific political party," Subaşı said in an interview with Turkish daily Yenişafak, referring to the perception that Alevis support parties on the left and refrain from other political parties. For generations Alevis voted for the secular main opposition Republican People's Party (CHP).

In recent years, the ruling Justice and Development Party (AK Party) has taken numerous steps to respond to the needs of ethnic and religious minorities in Turkey as part of democratization packages. A series of meetings were held with Alevi community leaders and academics to understand and define their grievances and find permanent solutions to them. The Alevi workshop series established as part of the "Alevi opening" brought the government and representatives of Alevi communities together to focus on long-standing Alevi issues and create a bridge between them and the government.

In order to solve the problem, the Alevi initiative was launched during Recep Tayyip Erdoğan's tenure as prime minister in 2009 and seven discussion workshops were held with the participation of Alevi opinion leaders and representatives from different segments of society over six months.

Evaluating the course of the Alevi opening and the workshops, Subaşı said that the Alevi workshop initiative is the first step to bring the sides together and clarify their demands in negotiations.

Subaşı also noted that the government left behind the Turkish state's 80-year-old perspective of Alevis with these steps and took the step to get in touch with Alevi communities in the country with the aim of solving their grievances and listening to their demands.

Highlighting that the different sections of society in the nation, including religious groups, do not know each other very well, Subaşı said that there are still some setbacks between Alevi and Sunni groups in the country, but important steps have been taken to break down these prejudices.

Referring to Prime Minister Ahmet Davutoğlu's latest remarks to solve the Alevi issue, Subaşı said that the prime minister is now opening a new road to understand the demands of the Alevi community and other discrimination caused by the long-continued Alevi issue.

Modern Turkey's longstanding Alevi turmoil erupted over the Dersim Massacre that took place in 1937 and 1938 in the Dersim region, now the province of Tunceli. The incident was considered a Turkish military campaign against an Alevi uprising after Turkey's 1934 Resettlement Law, which aimed to assimilate ethnic minorities. According to gendarmerie reports, 13,806 people were killed and thousands more were internally displaced due to the conflict in the region.

On November 23, 2011, then Prime Minister Recep Tayyip Erdoğan, apologized on behalf of the state for the 1937 Dersim tragedy. He also described the incidents as one of the most painful and bloody tragedies in Turkey's recent history.

Since the Dersim Massacre, Alevi activists have demanded to be treated as a religious minority, including official recognition and tax exemption for their houses of worship (cemevi), elective courses on the Alevi faith in public schools and greater emphasis on non-discrimination.

On Sunday, Davutoğlu announced that in line with Alevi demands, the old barracks in Dersim will be turned into a museum named the Dersim Museum. Tunceli University will also be renamed Munzur University after the region's Munzur River.

Returning the former names of Alevi regions is symbolically significant to the Alevi community. The renaming issue has unpleasant connotations for Alevis that evoke the pressure they have been under for their ethnicity, language or beliefs.

In a recent speech, Davutoğlu described the Dersim incident as a "modern Karbala" – the site of the martyrdom of Hussein ibn Ali, a grandson of the Prophet Muhammad – and called on the perpetrators and those responsible to apologize for the incident.