After training peshmerga, Turkey now set to train and equip FSA with US 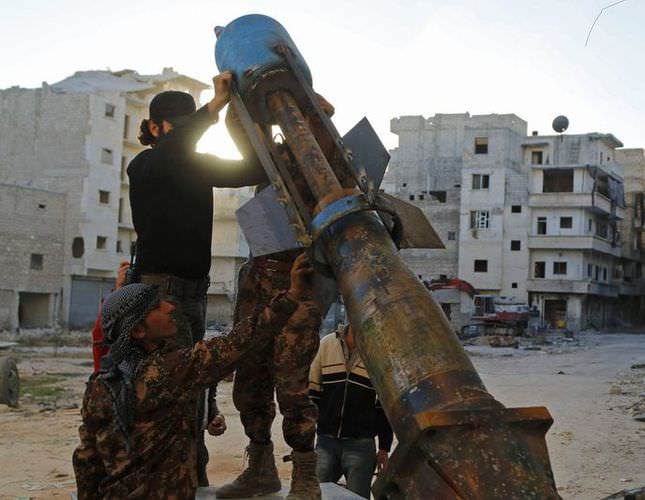 Turkey and the U.S. have narrowed the tactical differences on the training and equipping program for Free Syrian Army (FSA) fighters during U.S. Vice President Joe Biden's visit to Istanbul and the program is expected to be starting soon in the central Anatolian province of Kırşehir after the two sides finalize the deal. Ankara also announced on Monday that it has trained 230 peshmerga soldiers to fight the self-proclaimed Islamic State of Iraq and al-Sham (ISIS) in the northern Syrian town of Kobani. Discussions over training and equipping moderate Syrian opposition fighters to defeat both ISIS and the Bashar Assad regime in Syria is expected to be finalized and the training will start in the central Anatolian town of Kırşehir after U.S. and Turkish officials finalize the deal. The issue of the training and equippment program was evaluated between Biden and President Recep Tayyip Erdoğan during their four-hour meeting on Saturday in Istanbul and the officials said that the two sides have narrowed their differences.

Furthermore, a high level source from the Foreign Ministry confirmed that U.S. and Turkish officials have reached an agreement and currently army officials from the two countries are working on tactical details. Thus, the training and equippment program for up to 2,000 FSA fighters will begin in the coming days.

Last September Congress approved U.S. President Barack Obama's plan to train and equip up to 5,000 FSA fighters and Turkey accepted to train up to 2,000 FSA fighters as part of the plan. Sources from the Foreign Ministry already confirmed Turkey's ongoing cooperation with the U.S and announced on Monday that Turkey has already trained 230 peshmerga fighters. According to the plan, the FSA will nominate members to be trained while the U.S. and Turkey will have the final say on who will ultimately be trained. The train and equip agreement will see Turkey training the selected FSA fighters while the U.S. will equip them.

Local media outlets also reported that as a result of recent meetings held between Turkish and U.S. officials, FSA members will be trained in the Hirfanlı district of the central Anatolian town of Kırşehir. Speaking on the issue on Tuesday, Defense Minister İsmet Yılmaz did not deny that the training program will take place in Kırşehir, however, he said that the final deal is not signed yet and talks are continuing. Likewise, sources from the Foreign Ministry said on Tuesday that negotiations over the technical details between the military officials of the two countries are currently continuing and the final deal will be signed in the coming days.

Local sources from the Kırşehir province did not confirm the arrival of any FSA fighters to the town. Daily Sabah spoke with officials from Kırşehir governorate, but they declined to comment on this issue.

Erdoğan said on Saturday that Turkey is determined to strengthen its relationship with the U.S. to maintain regional peace and security. He made the comments in a joint press conference with Biden following a four-hour meeting.

"Our relations with the U.S. are based on mutual trust and benefit and are stronger than ever," Erdoğan said.

"We discussed with President Erdoğan what the coalition can do to defeat ISIS and we need Turkey's support. I think Turkey believes that they need us as well," Biden said.

Biden also announced that the U.S. will provide $135 million in humanitarian aid to help civilians affected by the Syrian war. The new funding will be provided to people inside Syria as well as Syrian refugees in Turkey and other neighboring countries.