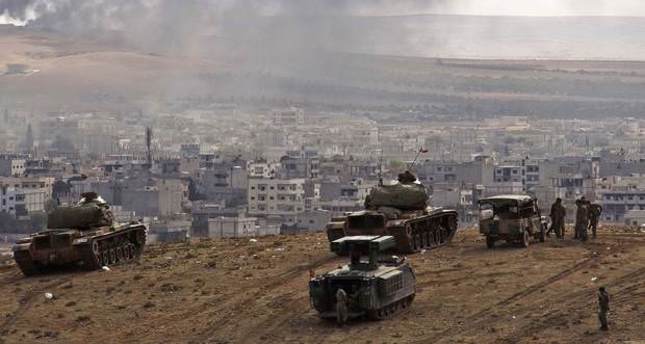 by French Press Agency - AFP Nov 26, 2014 12:00 am
Paris is pushing for "safe zones" to be set up in Syria where citizens would be out of reach of regime forces and Islamic State of Iraq and al-Sham (ISIS) fighters, Foreign Minister Laurent Fabius said Tuesday. Fabius said the country was working alongside U.N. envoy Staffan de Mistura who has proposed a "freeze" in fighting in Syria's second city of Aleppo. De Mistura wants the proposed cease-fire zones to allow for aid deliveries and lay the groundwork for peace talks in the three-and-a-half-year conflict that has left 195,000 people dead.

"We are working with the U.N. envoy ... to try and save Aleppo and on the other hand to create safe zones where it is not possible for Bashar Assad's aircraft and Daesh to pursue Syrians," said Fabius, using the Arabic name for ISIS.

"There are quite a few people to convince, the Americans of course," he added.

"Abandoning Aleppo would be to condemn Syria and its neighbours to years, and I mean years, of chaos, with terrible human consequences." Aleppo has been divided into government- and rebel-held areas since an insurgent offensive in mid-2012. In recent months, government forces have advanced around the outskirts of the eastern portion of the city that is under rebel control, threatening to encircle it completely. Syria's main opposition National Coalition on Monday urged de Mistura to include "refuge zones" on the borders with Jordan, Lebanon and Turkey in his plans. France is involved in strikes against ISIS militants in Iraq but has so far kept out of the air campaign in neighbouring Syria, where it has hoped to support moderate rebels without resorting to military action that could help the Assad regime.