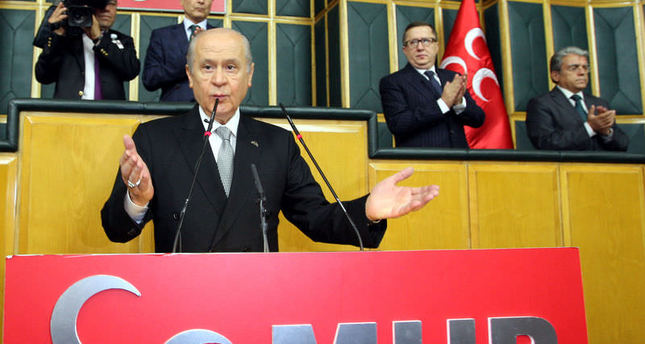 by daily sabah
Nov 26, 2014 12:00 am
Nationalist People's Party (MHP) leader Devlet Bahçeli announced on Wednesday that he will visit the eastern province of Tunceli , a predominantly Alevi region, after Prime Minister Ahmet Davutoğlu called on the party leader to go to the province and say that the ancestors of its people there were traitors.

The Prime Minister, speaking at AK Party's weekly group meeting, harshly criticized Bahçeli for his insistence on defending the Dersim Massacre which took place in 1937 and 1938 in the Dersim region - now called Tunceli - where a military campaign was carried out to suppress an Alevi uprising resulting in the deaths of over 13,000 people. Davutoğlu questioned Bahçeli's motives behind defending such assimilative and discriminative measures imposed by one-party rule in Turkey.

"I dare Mr. Bahçeli to pronounce these remarks – calling those who participated in the Dersim uprising terrorists and traitors - in Tunceli" said Davutoğlu, who said that it is not fair to wholly declare a specific group of people as traitors.

Bahçeli, in response, announced on Wednesday that he will pay a visit to Tunceli province on Nov. 28, to convey brotherhood there.

"For you to know [to Davutoğlu]; I will go to Tunceli to strengthen the holy brotherhood legacy of the nation. I will be there to embrace Tunceli, fulfill longing and destroy the seeds of discord. I will go there to show my support for the unity of Turkey." Bahçeli said in response to Davutoğlu's call.

MHP, embracing Turkish nationalism as its ideology, received 1, 43 percent of the votes in Tunceli province in the local elections that took place in March, 2014.