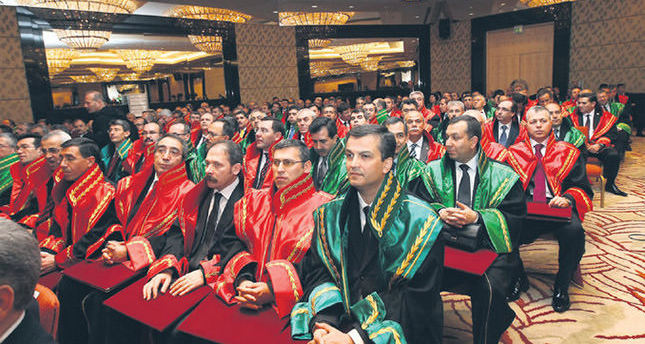 As the government-backed judicial bill that aims to revamp the current judicial system became a controversy among parties in Parliament and came under criticism by the chief judge of the Supreme Court of Appeals, Ali Alkan, the Justice Ministry issued a written statement on Tuesday to clarify the scope of the bill: "The current reform on the judicial system does not create outside interference to the independence of the courts."

The ministry's statement came one day after Alkan criticized the bill in a written statement quoting that the bill is an open intervention in the judiciary and against its independence.

Asking, "How long will this intervention continue?" in the statement, the chief judge asserted that no negotiation had been made with the related bodies during the preparation of the bill and added that the judiciary structure should not be regulated because of sudden incidents and without reasonable, legitimate reasons.

Refuting these claims, the ministry statement noted, "To legislate, to regulate or repeal a law is part of the TBMM's [Turkish Parliament] duties. The legislation is neither an interference to the judiciary nor to the executive bodies of the state. The executive and judicial bodies within the state are obliged to abide by and to enforce the laws legislated by Parliament."
"The chief judge's personal statement is an open confession of the discomfort felt based on the prejudice against the current and next Supreme Court members and the HSYK [Supreme Board of Judges and Prosecutors] will," the ministry statement added.

The ministry portrayed the question: "How long will this intervention continue?" as a conscious manipulation and direct accusation of the government for intervening in the judiciary and Supreme Court of Appeals. Claiming that Alkan's remarks lack an objective legal assessment, the statement urged him to leave politically motivated evaluations behind as a chief judge.

AK Party Istanbul deputy and member of the Justice Committee, Bülent Turan, in a comment to Daily Sabah, criticized Alkan's remarks: "It is not nice to interpret Parliament's lawmaking authority as an intervention in the independence of the judiciary."

He added that Parliament has the right to make legal changes if necessary and that all related bodies are obliged to abide by amendments passed by Parliament.

Retired chief public prosecutor, Reşat Petek, said that judges appointed to the HSYK or prosecutors appointed to the Supreme Court of Appeals Prosecutor's Office are under the office of the HSYK and added, "To evaluate this as an intervention into the judiciary means to disregard the HSYK."

Describing the chief judge as a spokesman of a certain group in reference to his criticism, AK Party Istanbul deputy and deputy chairman, Mustafa Şentop, asserted that Alkan does not want to disturb the status quo of the Gülen Movement within the judiciary. He said that the motive behind Alkan's speech is political, not legal.

The Gülen Movement is led by the U.S.-based retired imam Fethullah Gülen who lives in a self-imposed exile in rural Pennsylvania. It is accused of wiretapping thousands of people including Turkish government officials and encrypting phones with the help of affiliated members of law enforcement, public prosecutors and judges.

The judicial bill prepared by Justice and Development Party (AK Party) Kırıkkale deputy Ramazan Can and Isparta deputy Recep Özel, was introduced in Parliament on Oct. 21, only two weeks after the Oct. 6-7 Kobani protests that morphed into violent clashes between anti- and pro-PKK groups leaving dozens dead.

The item in the bill that is mostly debated is the change of the criminal code related to the authority of conducting a search of a suspect's body, house or business from "strong suspicion based on concrete evidence" to "reasonable doubt" as it is in some European countries such as France, Germany and the U.K. In France, police may detain suspects if they are under penalty of imprisonment within the scope of "reasonable doubt." Even though reasonable doubt is enough for German police to search a suspect, a judicial decision is necessary to search homes. In the U.K., the possibility of being involved in the crime is enough for reasonable doubt.

Turan said that searches with "reasonable doubt" are applied in most European countries and was flummoxed by its reception: "It is not possible to understand why they stand against this amendment so harshly, if we had enacted this legislation before, we might have prevented the deaths of dozens of citizens in the latest Oct. 6-7 Kobani incidents."

Although attorneys will continue to have access to the contents of a client's file during the investigation period and take a copy of required documents free-of-charge, in the event the access to and taking a copy of said files and documents may endanger the objective of the investigation, the attorney's right to such can be restricted by a judicial decision upon request by the public prosecutor. In Germany and the U.K., attorneys are able to access files after the investigation is finalized. In France, attorneys have the right to access all files on their clients and are able to investigate all administrative, disciplinary and crime complaints filed against them.

The bill seeks a pay hike for judicial members and develops personal rights of prosecutors and judges. The bill would change the five-year restriction of the judge and prosecutor exam and reduce the time limit to two years.

If accepted, the Justice Ministry will have an organization set up abroad in line with the bill. The judicial amendment also seeks to do away with the Judicial Year Opening Ceremony.

With regard to the question of whether these amendments boost the cadres in the judiciary, Turan said, "As of October, 610,000 files have been waiting at the Supreme Court of Appeals and the average wait to investigate these files is around 328 days. This shows that an amendment is necessary to reduce the workload."