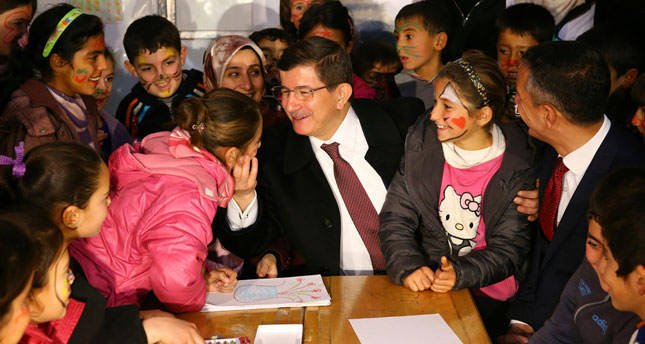 Prime Minister Ahmet Davutoğlu visited Syrian Kurdish refugees in the border town of Şanlıurfa on Wednesday. Prior to his visit to those who fled the civil war in neighboring Syria, he spoke to Justice and Development Party (AK Party) members and criticized main opposition Republican People's Party (CHP) Chairman Kemal Kılıçdaroğlu for his controversial position on Syria and the regime of President Bashar Assad. He made these remarks yesterday while addressing party members at the ruling AK Party's Provincial Chairmen's meeting held in the southeastern province of Şanlıurfa, marking the first time a government has held such a meeting outside of the capital.

Davutoğlu said that Kılıçdaroğlu accepted Iraqi Turkmens last week and pledged his support when he said, "Your destiny is our destiny," but that he intentionally turns a blind eye to the suffering of Syrian Turkmens.

He said that Kılıçdaroğlu's selective acknowledgement is based on the fact that he sympathizes with Assad, known to be a leader who does not hesitate to kill his own people. Davutoğlu called on Kılıçdaroğlu to accept Syrian Turkmens and ask them what Assad has done to them. "If you want to stand up for the oppressed, you need to listen to them first," he said and added that the only thing that will not change is Kılıçdaroğlu's friendship with Assad, claiming that the CHP represents the Turkish version of Baath Party ideology and Assad represents the Arab Baath Party.

Referring to his call for all political leaders to adopt a more respectful tone, Davutoğlu said that Kılıçdaroğlu has not seemed to accept his invitation due to his recent degrading remarks when he called Davutoğlu to conduct his duty as prime minister. He criticized Kılıçdaroğlu for calling on dissidents to leave the party if they do not believe the CHP will win the elections.

"Kılıçdaroğlu would leave his seat in the party if he would stipulate such a condition because I do not think he believes the CHP will come to power," Davutoğlu said, calling on Kılıçdaroğlu to stop his defamation campaign against the National Intelligence Organization (MİT). The prime minister said that Kılıçdaroğlu does not use factual evidence and bases his claims on newspaper articles and called upon the opposition leader to make the documents public if they exist.