President calls on Muslims to unite against chaos in the region 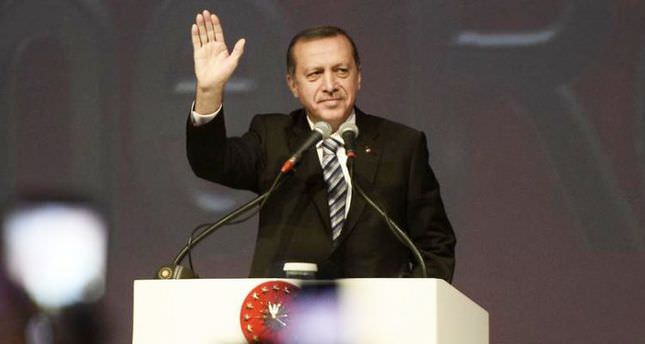 Addressing Islamic countries in his speech at COMCEC, President Recep Tayyip Erdoğan called for unity by Muslim countries to stop the bloodshed in the troubled region of Syria and Iraq

President Recep Tayyip Erdoğan, said on Thursday that the only way to overcome the crisis dominating the Islamic world is to create unity, solidarity and an alliance. Speaking at a ministerial meeting at the multi-national Organization of Islamic Conference (COMCEC), he called for Muslim countries to unite in the face of the chaos in the Middle East. The president said, "We [Muslim countries] can solve our problems only if we are united."

"Islamic countries, which have developed economically recently, have been experiencing the biggest humanitarian and political crisis in their history, simultaneously," the Turkish leader said.

"If we [as Muslims] act together, we will end the loneliness of Palestine that has continued for nearly a century... It is possible to end the bloodshed in Iraq and killing of Syrian children if we unite." Erdoğan called on the Muslim world to take action over the crises in Syria and Iraq, saying: "Please look at the picture and understand who wins and who loses from these killings and clashes?"

Erdoğan was particularly critical of the U.N., saying: "While the United Nations stands idly by, the bloodshed of children, the Organization of the Islamic Conference cannot remain quiet."

"Has the United Nations found a solution to what has been happening [in Syria, Iraq] so far? Does the U.N. have justice?" he said. "You cannot expect justice from a body that does not have justice at all."

Also on Thursday, the president issued a written statement regarding his remarks on women's rights and equality when he addressed the First International Women and Justice Summit in Istanbul on November 24.

Highlighting that Erdoğan's remarks about women's issues had been misinterpreted and taken out of context, the statement said, "His [Erdoğan's] words were meant to recognize the unique qualities between the genders and highlight that there are differences that should be respected and not ignored."

Touching on the conceptual differences between "equality" and "equivalent," the statement explained the semantic difference between these words in line with Erdoğan's remarks and said, "This is a defining difference and it is indeed true that men and women are fundamentally different in terms of molecular construct from DNA to physical attributes and very few would argue that. But what is the important part that is being omitted due to misinterpretation, and what lay at the heart of President Erdoğan's message, was that despite not being equal i.e., in size, shape, degree and make-up, it is imperative that all be treated equivalently, the value of being equal, especially in status, rights, and opportunities."

In his speech, which sparked controversy in the international media, Erdoğan said "What women need is to be able to be equivalent, rather than equal, so it is justice. That is what we need."

"The president's speech does make attributions to women's value as mothers in society and it is clear that he expresses his appreciation for all mothers including his own. This special role needs to be recognized and celebrated for its importance in the functioning of a healthy society," the statement added in reference to Erdoğan's description of Islam as "giving a higher rank to women, which is that of motherhood."

"The equality between women and men in society is what the Turkish government strives for, as demonstrated by the many measures it has taken to achieve this goal. It also strives for justice for all of its citizens so each is treated fairly under the law," concluded the statement.