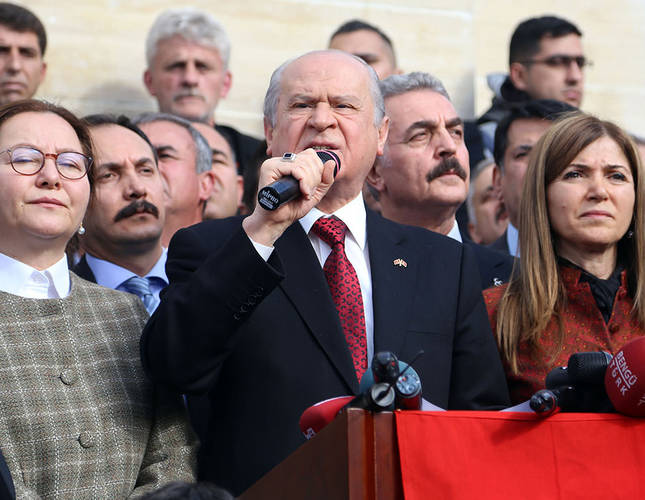 by daily sabah
Nov 28, 2014 12:00 am
Nationalist Movement Party (MHP) leader Devlet Bahçeli stood behind his argument that the participants in Dersim 'rebellion' were separatists, as he delivered a speech in Tunceli. The speech came as a response to the challenge by Prime Minister Ahmet Davutoğlu who had previously called on the leader to visit the province and tell its locals that their ancestors were 'traitors'.

Bahçeli arrived in Tunceli, a predominantly Alevi region, amid tight security measures on Friday. Following a call from Davutoğlu he announced on Wednesday that he would visit Tunceli to 'convey brotherhood there'. But it became apparent on Friday that he was not as welcome in the province as he had thought. The Alevi institutions signed a joint statement saying that they do not want him in the province a day before his visit.

The locals of the province protested his visit by shutting down their shops. His plan to visit the people working in those shops and mingle with them was therefore forced to be cancelled. His plan to visit cemevis was likewise cancelled due to the Alevis' reluctance to meet the leader.

However, Bahçeli was courageous enough to utter the same words he delivered during his parliamentary group meeting in Ankara, which only triggered the protests further.

The police are reported to be intervening on and off in the protests by firing pepper gas.

The Prime Minister, speaking at AK Party's weekly group meeting, harshly criticized Bahçeli for his insistence on defending the Dersim Massacre which took place in 1937 and 1938 in the Dersim region - now called Tunceli - where a military campaign was carried out to suppress an Alevi uprising resulting in the deaths of over 13,000 people. Davutoğlu questioned Bahçeli's motives behind defending such assimilative and discriminative measures imposed by one-party rule in Turkey.

"I dare Mr. Bahçeli to pronounce these remarks – calling those who participated in the Dersim uprising terrorists and traitors - in Tunceli" said Davutoğlu, who said that it is not fair to wholly declare a specific group of people as traitors.