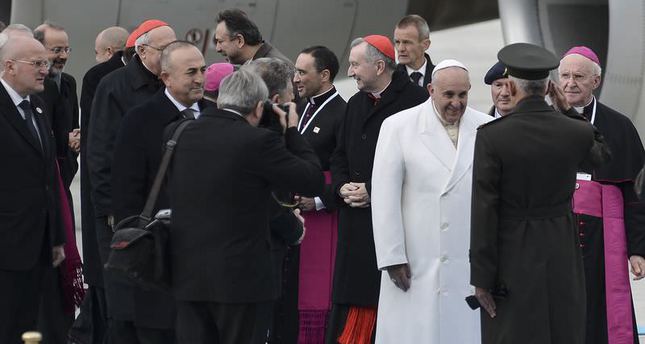 by Daily Sabah with AA Nov 28, 2014 12:00 am
Pope Francis has arrived in Turkey at the start of his three-day visit to the country. He is expected to use the trip to try to thaw relations with the Islamic world and rebuild the bridges with Muslims that had been damaged by his predecessor, Pope Benedict XVI.

The Pope's plane landed in Ankara's Esenboğa airport around noon. As ten Turkish soldiers stood in ranks, the Supreme Pontiff walked down the ramp from his plane to be greeted by Turkey's Foreign Minister Mevlut Cavusoglu, Turkish Ambassador to the Vatican Professor Mehmet Pacaci, Vatican Ambassador to Turkey Antonio Lucibello, and the famous Turkish actress Serra Yilmaz.

Both the Turkish and the Vatican flags waved over their heads, and the Pope, wearing a long white coat, shook hands with all of those who came to greet him.

Before leaving the airport, Pope had a cup of Turkish tea with minister Cavusoglu and the ambassadors.

The first stop for the Pope was the mausoleum of Mustafa Kemal Atatürk, who was the founder and the first president of the Republic.

The 76-year-old Argentine pope is the fourth Supreme Pontiff to visit Turkey. Pope Paul VI visited the country in 1967, Pope John Paul II in 1979 and Pope Benedict XVI in 2006.

Turkish President Recep Tayyip Erdogan will receive Pope Francis at the Presidential Palace. The visit also marks the first time the president will receive an official delegation at the newly opened palace.

The head of Turkey's religious affairs, Mehmet Gormez, will also meet with Pope Francis, and the two will hold a joint press conference.

The Supreme Pontiff will depart early for Istanbul on Saturday, where he is expected to hold a Mass at the Catholic Cathedral of the Holy Spirit and pay a visit to Sultanahmet Mosque.