When you eradicate the middle ground, people will have no place to go but extremes 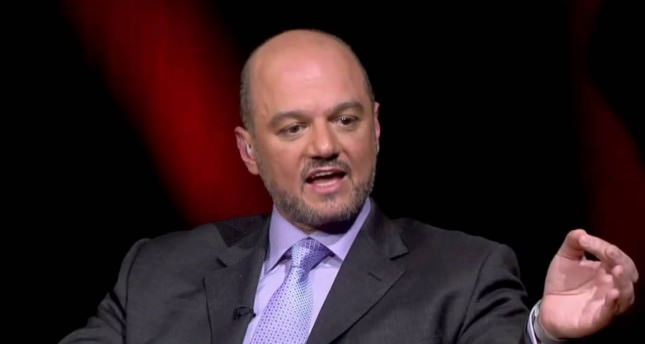 In an exclusive interview with Daily Sabah, Dr. Anas Altikriti, a U.K.-based expert on Middle East affairs, evaluated the recent terrorist list released by the United Arab Emirates cabinet and the latest developments in the region including the Islamic State of Iraq and al-Sham

Dr. Anas Altikriti is the chairman of the Muslim Association of Britain (MAB) and the chief executive and founder of The Cordoba Foundation (TCF), a think tank promoting intercultural dialogue and positive coexistence among civilizations, ideas, cultures and people.

He is a British-Iraqi who was born in Baghdad in 1968 and came to settle in London in 1970. His father, Dr. Osama Taufiq Altikriti, was a physician who came to head the Muslim Brotherhood in Iraq. Due to the opposition against the Baath regime, Osama Altikriti and his family had to leave Iraq. Anas Altikriti is a hostage negotiator who helped secure the release of 17 hostages including British campaigner Norman Kember from various conflict zones.

In July, the bank accounts of three Muslim organizations, including TCF, Finsbury Park Mosque and the Ummah Welfare Trust (UWT) were shut down by HSBC, who said their services fell "outside of our risk appetite." Altikriti linked HSBC's decision to Gaza.

Recently, the United Arab Emirates (UAE) cabinet issued a federal law listing no less than 83 organizations, associations, charities, groups, parties and entities from around the world as being associated with terrorism. Prominent foundations such as Islamic Relief, the Council for American Islamic Relations (CAIR), MAB and TCF were listed as terrorist organizations along with Islamic State of Iraq and al-Sham (ISIS), Boko Haram and al-Qaida.

Daily Sabah: First of all, how does it feel to be listed along with al-Qaida, ISIS and Boko Haram as a terrorist organization by the UAE?

Anas Altikriti: At first my reaction was to laugh when I saw the list and I saw how those who made up this law put organizations such as The Cordoba Foundation, CAIR, Islamic Relief, Muslim Association of Britain, Muslim American Society and many others who have been providing excellent services to their respective communities for many many years, next to the likes of Boko Haram, ISIS and al-Qaida. By doing so the law was discredited and emptied of all value and worth. However, the danger of the situation is that the UAE government has essentially deemed any dissenting voice to be a terrorist and hence, the whole concept of terrorism has now evolved into a new sphere, which will bring with it further callous and reckless policies that target those who are working hard to create better conditions for their communities and constituents.

Furthermore, when the list places the likes of The Cordoba Foundation next to ISIS, totally disregarding the diametrically opposed ideologies, tactics and ethics between the two, it essentially encourages young frustrated Muslims to join ISIS rather than TCF since they are both seen by the lawmakers as being similar. When you eradicate the middle ground, people will have no place to go but to the extremes, and this is a real danger that faces everyone in the world today because of this foolish law passed by the UAE government.

DS: Prime Minister David Cameron of the U.K. also described TCF as "a political front for the Muslim Brotherhood" and he has ordered an inquiry into the activities of the MB in the U.K. in April. Yet, not so long ago, the U.S. and Europe seemed ready to work with Mohammad Morsi before he was deposed by the military coup. Why did the West suddenly strike a negative attitude toward MB?

AA: TCF challenged David Cameron several times to prove his claim regarding it being a front for the Muslim Brotherhood, or any other group or organization. In every instance, he failed to respond. However, regarding the U.K. government's review of the MB, the report that was authored by the U.K. ambassador to Saud Arabia, Sir John Jenkins, stated that the MB and its leaders had no link to terrorism whatsoever. This seemed to have angered the U.K.'s friends and commercial partners in the Gulf - the UAE and Saudi Arabia particularly - who have pressured government officials to prevent the report from being published. Once again, we have a very clear example of a policy that lacks not only ethics, but reason and rational. If it was true that the world was waging war against ISIS and violent extremism, it doesn't make any sense to also wage a simultaneous war against a group that has rejected violence and adopted democratic values. Also, since it is impossible to eradicate an ideology such as that of ISIS with the use of missiles and bullets, it is vital to engage groups like the MB to engage with them in an ideological exchange that would see most of its support and supporters dissipate. Unfortunately, the U.K. is pursuing financial and commercial interests at the expense of success in the war against violent extremism and terrorism, let alone at the expense of morality and ethical considerations.

DS: Do you think the British government will give any response to British organizations being labelled as terrorist organization by the UAE or David Cameron will recognize the list and make a move against you?

AA: The U.K. has already contacted the UAE government to seek clarification as to this law. However, it's not clear how far the U.K. will go in standing up to the bullying and arm twisting tactics of the UAE, and defending the organizations that are registered in the U.K. and operate under its laws. We have called on Cameron to reject such an attack on moderate British Muslim organizations by an autocratic, anti-democracy and anti-freedom regime whose record is full of human rights abuses. It is of course possible that Cameron will use the UAE law to justify a clampdown on these organizations and more, but we have no intention of lying down and taking such bullying methods without a legal and media fight.

DS: The U.S. and Britain occupied Iraq with the claim of the existence of the terrorist organization al-Qaida. However, in one of your interview given to CII News, you said, "Before 2003 we didn't even hear of anything called al-Qaida in Iraq, we came to a situation where now al-Qaida's main base in the world is in Iraq." In addition to al-Qaida, Iraq is now facing another terrorist organization crisis - ISIS. Where or how do you think ISIS came into existence?

AA: These nihilistic abnormal ideologies, whether they are al-Qaida, ISIS, Boko Haram or any other, only emerge and thrive in abnormal, corrupt, oppressive and failed conditions. There are extreme and inhumane elements in every human society such as Anders Breivik in Norway, Timothy McVeigh in Oklahoma, and the list goes on and on. However, these remain anomalies when a level of freedom, justice and transparency prevails. In the case of many Arab and Muslim countries due to the lack of such freedom and justice, these elements become deep rooted and real players within society and on the ground. As a result, our struggle and support for the transition of all Arab and Muslim countries to a state where the values of justice, freedom, transparency, accountability and democracy is not just because we want to vote for those who lead and then hold them accountable, but because these are the values that defeat and eradicate any chance for such nihilistic, inhumane and evil ideologies to emerge and prosper. Therefore, when the U.S. and U.K. decided to launch a war against Iraq, millions from around the world warned that this would lead to many evils, including the emergence of such groups as al-Qaida and others. Unfortunately, this was ignored and the Iraqi people have suffered for more than 11 years now from such groups as well as a corrupt and failed government that pursued sectarian policies. ISIS comes as a result of another failed policy in Syria and the unethical stand of the international community in respect to the mass slaughter carried out by the Syrian dictator [Bashar Assad] against his own people. As long as injustice, whether internally or internationally, continues, we will continue to see such groups emerge, grow, play havoc and unleash terrible violence against everyone.

DS: What about the anti-ISIS coalition? It seems the coalition focuses solely on ISIS and not the Assad regime. Do you think it is possible to stop ISIS without toppling the regime?

AA: Again, this is one of the most serious problems of the West's policies in the region. It is true that the whole world seems to demand that we speak of nothing and no one else but ISIS, as though the region's entire problems begun with the emergence of ISIS and prior to that, everything was fine. The failure of the U.S. and the major Western countries to acknowledge that ISIS is a result and a side effect of a much deeper problem means that they will never be able to solve this crisis, only spread it further and allow it to produce other groups and ideas such as that of al-Qaida, ISIS and others. In the case of Syria, the unethical stand of the world regarding the massacre committed by Assad against his people is directly responsible for the emergence of the likes of ISIS, who actually served to save the regime from collapsing at a critical moment in the life of the Syrian revolution. Therefore, as long as Assad and similar regimes exist, ISIS and others of a similar nature will continue to emerge and play havoc with the region's chances for security, stability and future prosperity.

DS: To conclude the interview, what would you like to say about the power of Turkey and Turkish foreign policies in the Middle East as a political analyst who covered issues relating to the region?

AA: I continue to see Turkey as being the most important player in the region over the past two decades, and potentially for the foreseeable future. The way in which modern Turkey's role in the region was shaped based on sound economic models, zero-conflicts with bordering countries, open borders to the world and ethical considerations at all times, is refreshing and has proven a huge success and a model for most countries in the developing world. I also recognize the immense challenges Turkey faces internally, regionally and internationally due to its success, as well as its growing importance in the region and around the world and I continue to wish it, its government and its people continued success, prosperity and peace.

Dr. Altikriti holds a doctorate in political studies from Westminster University, London. He is an international speaker and lecturer and appears regularly in the Arab and international media commenting on Arab, Muslim and international affairs such as the BBC, Al-Jazeera and Al-Arabiyya. He has written a number of articles for newspapers such as The Guardian and the Huffington Post. Altikriti is also an adviser to a number of government and nongovernmental bodies on strategic issues pertaining to the Middle East and North Africa. Dr. Altikriti is an expert on Middle East affairs, political Islamic thought and extremism.