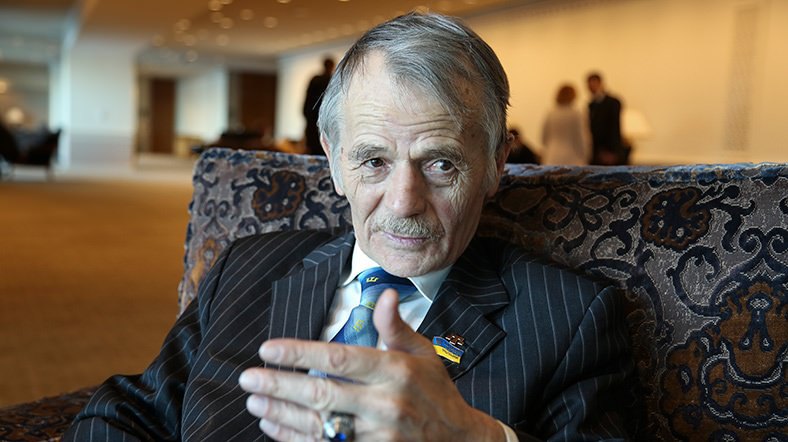 Crimean Tatar leader Qırımoğlu, who was prevented from entering Crimea by the pro-Russian government, says the situation for Tatars is worse than during the Soviet era. ‘In Soviet times, opposition figures were first judged and then sent to jail; however, today they are abducted and killed’

After the Autonomous Republic of Crimea's unilateral declaration of independence and annexation by Russia, Crimean Tatars are the largest and one of the most adversely affected ethnic groups who supported the territorial integrity of Ukraine. Daily Sabah interviewed Mustafa Qırımoğlu, a Crimean Tatar leader and a member of the Ukrainian parliament, during his visit to Ankara and talked about the latest developments regarding Crimean Tatars.

Daily Sabah: How do you analyze the current situation in Crimea?

Qırımoğlu: The current situation in Crime is even worse than the Soviet regime. At least there were certain procedures in the Soviet regime. Opposition figures were first judged and then sent to jail; however, today they are abducted and killed. This causes fear among the people and due to this fear, people are leaving Crimea.

To our knowledge, 19 people have been abducted and killed so far. People are frightened. We advised our citizens not to leave their homeland, but approximately 8,000 to 10,000 citizens have left Crimea and migrated to other cities in Ukraine. Now they are conscripting our youth for the Russian army. According to the Russian Criminal Code, if they do not heed the call, they will serve time in jail. Therefore, they will be forced to leave the country. Thus, we are being exiled again.

There aren't any freedoms left in Crimea, as it was in the Soviet Union. People are afraid to talk to each other. If they proclaim that they do not approve of the Russian invasion, they are called by the intelligence service and are terrorized. This is how fascist the regime in Crimea is. The solution is to force Russia to end the invasion by furthering serious sanctions, but this does not seem to be happening.

DS: During your visit, you met President Recep Tayyip Erdoğan, Prime Minister Ahmet Davutoğlu and Foreign Affairs Minister Mevlüt Çavuşoğlu. What were the topics of disccussion? What are your expectations of Turkey?

Qırımoğlu: We have great expectations regarding Turkey, but we do not expect Turkey to single-handedly end the invasion while European countries and the U.S. do not have a clear attitude toward Russia's acts.

In our talk with President Erdoğan, we focused on providing shelter to Crimean refugees. Many of the Tatars who escaped from Crimea now reside in a city called Kherson. We requested Turkey build houses for them and the president said that Turkey will realize this.

DS: There was news regarding the establishment of a military unit consisting only of Crimean Tatars. Are there any preparations?

Qırımoğlu: Ten days ago, during our meeting with [Ukrainian President] Petro Poroshenko, I conveyed our expectations of the establishment of a military unit to protect Crimean Tatars in the Kherson region. Poroshenko suggested that Crimean Tatars serving in the Ukrainian army could be gathered in a unit there.

Apart from this, we have heard of attempts to make Tatars who remain in Crimea serve in the Russian army. Of course, our youth does not want to serve in the Russian military, but they are threatened with detention and jail time. Unfortunately, Russians are doing whatever they can in order to send Tatars away from their homeland.

DS: Crimean Tatars constitute the largest Muslim population in Ukraine. In this context are Tatars facing religious pressure from Russians?

Qırımoğlu: When the invasion of Crimea became evident, Russian authorities demanded support for the invasion from us. They declared that they would solve all the issues that Tatars face if we supported them. We rejected their demands and now they are trying to intimidate us with pressure and are disintegrating our society. Most of the pressure focuses on the religious aspect. Russians have appointed another mufti in addition to our current one and they are trying to blackmail our mufti. We are facing serious issues in regard to this matter.

DS: You have been banished from Crimea. Are there any developments to abolish this prohibition?

Qırımoğlu: Unfortunately, there are none. Recently, President Erdoğan called [Russian President Vladimir] Putin regarding this issue. Putin told Erdoğan that if I was to renounce my position on Russia, he could help. Putin, therefore, wanted us to accept and approve of the Russian invasion. I have dedicated my life to Crimean Tatars – I will not yield, no matter the pressure. Putin cannot interfere with my declarations.

Apart from Erdoğan, Austrian President Heinz Fischer also acted as a medium in this situation. In June, I was given the Solidarity Award in celebration of Polish Independence Day. During the meal, Fischer told me that he found my banishment unjust and would discuss the matter with Putin. In the following days, Fischer talked with Putin and received a meaningless response that claimed this was an issue regarding Ukraine.

DS: You also talked with U.S. President Barack Obama during this event. Were you able to convey the problems of Crimean Tatars to him?

Qırımoğlu: I had the chance to talk with both Barack Obama and the U.S. Secretary of Defense John Kerry during the meeting and informed them of our issues. I expressed my disturbance regarding the neglect of Crimean Tatars when mentioning Ukraine. Obama said that they would not overlook the situation and would force Russia until they retreated from the invaded territories. Kerry also reiterated that they would not overlook the issue.

DS: During this process, do you think that you have received sufficient support, both material and moral, from the U.S. and EU?

Qırımoğlu: First, I want to state that we do not expect material support. A humanitarian organization originating from Europe expressed that they could send us humanitarian aid due to the fact Crimean Tatars were the vanguard against the invasion and thus, were suffering the most. Our citizens who are forced to leave Crimea go to cities in western Ukraine and some of their needs, such as food and shelter, are provided by these organizations.

On the other hand, Tatars who continue to reside in Crimea are saying that they will resist even if electricity and water is cut. The most important point is to end the invasion. At this point neither the U.S. nor the EU has made a stand, and the whole world watched as Russia invaded Crimea.

The issues are numerous and we are having a hard time, but the solutions to these issues completely rely on Ukraine. When Ukraine gets rid of the invaders and Crimea regains its prior status, most of our problems will be solved.

DS: What happens if the current situation is sustained? What are your expectations?

Qırımoğlu: As long as the Russian invasion continues, the pressure against Crimean Tatars will continue and we will be isolated. During these events, Tatars did not bow to Russia, but supported Ukraine instead. Ukraine has also seen this. Our demand is the withdrawal of the invasion forces. We want Crimea to be a part of Ukraine as an autonomous state.

Mustafa Qırımoğlu is the head of the Crimean Tatar National Assembly and a member of Ukrainian parliament. He was born in 1943. In 1944 when he was six months old, like all Crimean Tatars, he was exiled with his family to Andizhan in Uzbekistan. In 1961, he established the Crimean Tatar National Youth Organization with friends. When he refused to serve in the Soviet army, he was arrested and sentenced to 1-and-a-half years in prison. He was among the intelligentsia who protested the Soviet Union's invasion of Czechoslovakia and was sentenced to three years in prison. In 1974 he was arrested for the third time and sent to a gulag in Siberia. He was sued again for his letters, which he sent to his friends and family, alleged of slandering the Soviet Union, when there was three days left until his release. He then started a hunger strike that lasted for 303 days. In November 1983 he was arrested for the sixth time. After the trial at Tashkent, Uzbekistan, he was sent to a gulag for three years. After being released from prison, he continued his national activities. He was elected as the head of the Crimean Tatar National Movement in Tashkent in May 1989. In the elections held on March 29, 1998, he was elected as a member of Ukrainian parliament and continues to serve today. He was given the Nansen Refugee Award by the U.N. for his extreme efforts to peacefully return his people from exile.