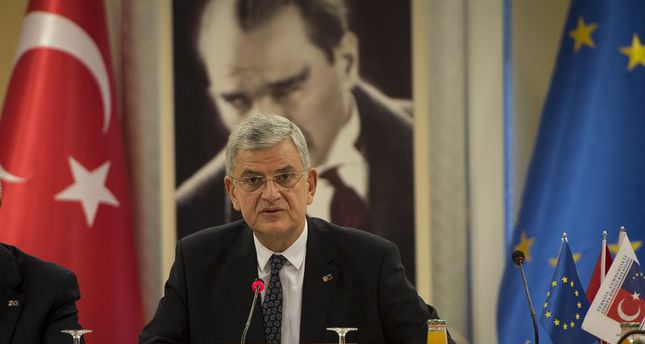 Speaking at a press conference Bozkır underlined that the National Acton Plan is a road map of Turkey's priorities on political reforms and socio-economic transformation within the context of the EU accession process and that phase II of the plan including primary and secondary legislation, institution building and other relevant work for aligning with EU legislation for the period between June 2015 and June 2019.

"The enactment of 53 laws and 246 pieces of secondary legislation as well as 136 institutional capacity-building initiatives has been envisaged for phase II of the National Action Plan for June 2015 to June 2019," he said.

"I would like to particularly underline that Turkey's perspective of full membership to the European Union is not a matter of circumstance, but is the objective of a lasting and strategic approach," Bozkır said. Emphasizing that the first pillar of the EU strategy is the political reform process, Bozkır defined phase II of the plan as an indicator of Turkey's commitment to continue with reforms and emphasized that the National Action Plan includes arrangements significant not only to the reform process, but also to accession negotiations.

The enactment of this law organization aims to build a professional border security organization to operate at all border gates to fulfil one of Turkey's obligations set forth in the road map toward a visa-free agreement between Turkey and the EU. Bozkır further said that the Law on Legal Aid to the Victims of Crime will also be revised and, within the framework of the European Convention on Human Rights, the material injuries of the victims of crimes of violence will be compensated, psycho-social support will be provided or advisory services will be made available as part of the reforms within the scope of phase II.

Bozkır also said that the number of arrangements to further serve citizens' daily lives will be introduced as part of reforms in phase II. He stressed that these arrangements will not only be in the political area, but in nearly all areas of social life such as the Law on Product Safety and Technical Regulations, Environmental Liability Law and Fisheries Law.

"We will make all efforts for the full and timely implementation of the arrangements referred to in the National Action Plan and will closely monitor the necessary work," Bozkır said.