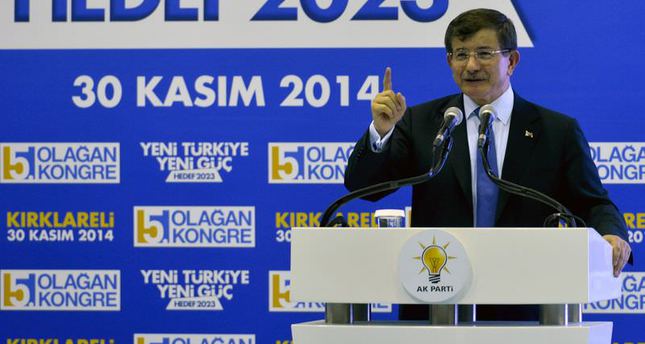 by AA Dec 01, 2014 12:00 am
Turkish Prime Minister Ahmet Davutoğlu has pointed the finger at opposition parties for possible 'backstage plans' to force a reshaping of politics in Turkey and cripple stability ahead of the 2015 parliamentary elections.

The PM made the remarks late on Sunday at a provincial congress of his Justice and Development (AK) Party in northwestern Kırklareli province as Turkey braces for the next year's general polls scheduled for June.

"There are certain attempts to form alliances behind the scenes; we've been hearing of some meetings between the Republican People's Party (CHP) and the Peoples' Democratic Party (HDP) and efforts to make a new political design so as to imperil the political and economic stability in Turkey," he said.

Davutoğlu argued that the main opposition CHP first exploited the country's Kurdish solution process and then held a 'secret rendezvous' with the pro-Kurdish HDP in southeastern Diyarbakır province.

He was referring to the process which was launched by the AK Party government last year, aiming to secure an end to the decades-long conflict with the outlawed PKK terrorist group, which has claimed the lives of more than 40,000 people in three decades of fighting.

In early October, HDP issued a call via social media inviting its sympathizers to the streets, sparking illegal demonstrations across Turkey as a sign of 'solidarity' with Syria's Kurdish populated town of Kobani that has been under siege by terrorist group ISIS.

The PM called on the Turkish people to "draw the line against this attitude," warning that the opposition parties could "try similar games like those during the Gezi Park protests, and December 17 and 25 anti-graft probes (against the government) before the March 30 local elections."

"I am addressing my noble nation which sees and acknowledges the headway Turkey has made over the last 12 years of stability. Now as we are heading towards the 2015 elections, they may get into new efforts to redesign our politics like they attempted to close our party and sought ways to put the government under tutelage and lead to military coups in order to deal a blow to the development and political stability in Turkey," he added.

Davutoğlu further maintained that all such quests -- which he termed as "political engineering" -- will fail as they did for the last 12 years thanks to the national will that blocked all "redesigning and reshaping" attempts.