Media claims Turkey, US agree on safe and no-fly zones in Syria 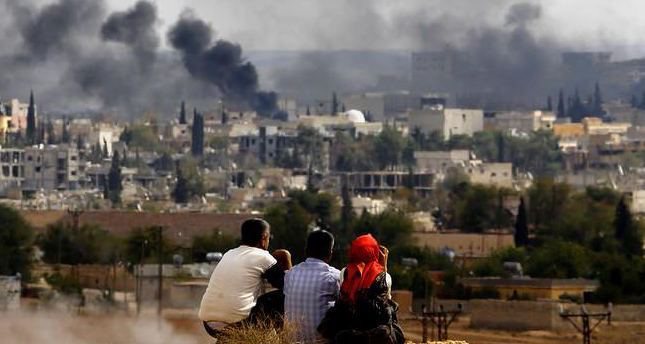 Following continued Turkish demands to adopt a comprehensive strategy on Syria including the ouster of Assad, Bloomberg reported the U.S. is now strongly considering setting up safe and no-fly zones, on the day Russian President Putin arrived in Turkey with 10 ministers for talks on economy

Up until now the U.S. has demonstrated consistent reluctance to set up a safe zone and no-fly zone in Syria despite repeated calls from Turkey. It is now reportedly finally working on a new plan to establish the zones, Bloomberg claimed on Monday.

According to regional experts, the timing of the reports is not a coincidence as the anti-Islamic State of Iraq and Syria (ISIS) coalition leader is not happy that its NATO ally strengthening ties with Russia, which has had sanctions levied against it by the EU and U.S. for its role in the Ukrainian crisis and its annexation of Crimea. Analysts say that during U.S. Vice President Joe Biden's visit to Turkey last week, Turkish leaders reiterated their concerns over a possible influx of refugees from war-torn Syria and that ousting President Bashar Assad is key to fighting extremists in the region and to bring peace and stability to Syria.

Bloomberg reported on Monday that a new proposal is being discussed by U.S. officials under the name "air-exclusion zone," which would be established as a buffer area inside Syria along the Turkish border that would be manned by Turkish soldiers and protected by U.S. air power. The purpose of establishing the zone would reportedly be to ensure protection for some Syrian rebels along with civilians who are escaping ISIS, which has taken over large parts in Syria and Iraq, and the Assad regime. The zone, if implemented, would also increase the safe flow of humanitarian supplies to Syria.

Furthermore, The Wall Street Journal reported on Monday that the U.S. and Turkey are close to an agreement on a joint military action against ISIS in northern Syria. The Wall Street Journal, citing officials from both countries, reported that the proposed deal would allow the U.S. and its coalition partners access to Turkish air bases to use as launch points for air campaigns. The agreement would also include a protected zone along part of the Syria-Turkey border that would be off limits to Syrian government aircraft and provide protection for moderate Syrian rebels and refugees fleeing the country's bloody, three-year civil war. U.S. officials told the paper that talks between the two nations were still in the preliminary stage and a final deal may not be agreed upon for weeks.

Since civil war broke out in Syria in 2011, U.S. President Barack Obama's administration has not been in favor of establishing a safe zone for several reasons, the most apparent being hesitation that the U.S. might be dragged into a war with the Syrian regime. The ever present threat of ISIS in Syria was also not enough for the U.S. to favor the zone, despite repeated calls from the Turkish government. Ankara has highlighted at every opportunity its conditions for stepping up its efforts with the U.S.-led anti-ISIS coalition, the most important of which is the removal of Assad from power. President Recep Tayyip Erdoğan has made it clear that if Turkey's aid and support is demanded in the fight against ISIS, a safe zone and a no-fly zone should be established in Syria and the Syrian regime should be targeted along with ISIS as he deems Assad to be the root of the turmoil in the area.

The Bloomberg article claimed that top officials have tipped that a shift may take place in Obama's previously staunch position on establishing a safe zone in the fight against ISIS. The speculation came following Biden's visit to Turkey to discuss the issues concerning the coalition of which Turkey is a part. During the meeting, the two leaders focused on cooperation in fighting ISIS in Syria and Iraq as well as coping with the humanitarian crisis caused by the conflicts on the other side of Turkey's southern border.

The three officials reportedly said that John Allen, the U.S. special envoy for the anti-ISIS U.S.-led coalition, had discussed the establishment of an 'air exclusion zone' with senior Turkish officials during a trip he paid to Turkey earlier in November. If the plan negotiated by Allen is approved by Obama, it will mark an alteration of his earlier strategy, which has ignored many calls up until now.

According to top officials, Allen discussed the proposal as part of a package that would also include Turkey expanding its support in its fight against ISIS in other ways, including using "Turkish troops inside Syria to spot for U.S. airstrikes," and "allowing U.S. manned planes to fly anti-ISIS missions from Turkey's İncirlik Air Base." Turkey has thus far only permitted the U.S. to fly drones from the İncirlik air base.

The November elections in the U.S. that will put Republicans in power in the U.S. Senate and extended their majority in the House of Representatives in 2015 is seen by some to have crippled Obama's authority regarding decisions on Syria. If the speculation that Turkey and the U.S. have finally reached a consensus on establishing a no-fly zone turns out to be accurate, Republicans are thought to be behind Obama's shift in policy given that since 2012 he has resisted calls from both parties of Congress to establish protected areas in Syria.