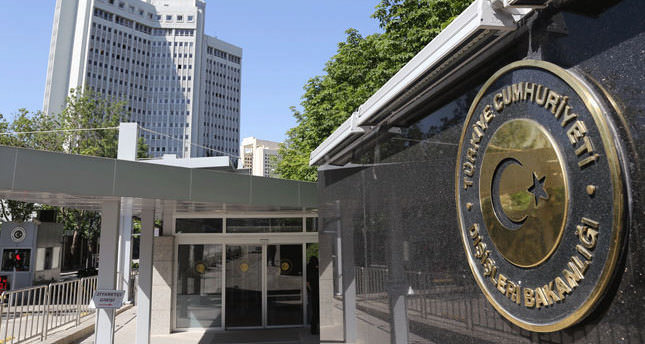 by Daily Sabah with AA Dec 02, 2014 12:00 am
Turkish Foreign Ministry said in a written statement on Tuesday that the Egyptian government's allegations that President Recep Tayyip Erdoğan was interfering in the internal affairs of Egypt are null and void.

The ministry said that the statement, released by the Egyptian Foreign Ministry on December 2, about Erdoğan was unacceptable and did not fit within diplomatic norms.

"Turkey's calls for addressing the Egyptian people's legitimate demands for democracy, equality, freedom and prosperity will continue, unless tangible progress is achieved. Turkey will not refrain from remaining actively seized of the matters such as ending human right violations in Egypt and respect for the free will of the brotherly people of Egypt." the statement said.

The statement also said the Egyptian regime should not get the idea that their inhumane actions in Tahrir Square in 2012, which left thousands of protesters dead and the recent release of former President Hosni Mubarak, who was said to be responsible for the killings, had gone unnoticed.

A criminal court in Egypt dropped Saturday all charges against Mubarak, his interior minister and several Egyptian interior ministry officials for conspiring to kill protesters during the uprising that forced the former president out of power in early 2011.

Another Egyptian court on Tuesday referred 188 defendants-most of whom are supporters of ousted president Mohamed Morsi-to the grand mufti, Egypt's top religious authority, to consider possible death sentences over their alleged involvement in the storming of a police station in Kerdasa town and killing 11 policemen, a judicial source said.

The statement came after a day Egyptian Foreign Ministry condemned statements made by Turkish President Recep Tayyip Erdoğan about the situation in the Arab country.

"We view as strange Erdoğan's flagrant interference in Egypt's internal affair and his underestimation of the will of the Egyptians reflected in a popular revolution (in reference to mass protests that led to the military ouster of elected president Mohamed Morsi), and presidential election that were proven fair by regional and international organizations," the Egyptian ministry said.

Turkey has frequently described the takeover by the current Egyptian President Abdel Fattah al-Sisi as a military coup.