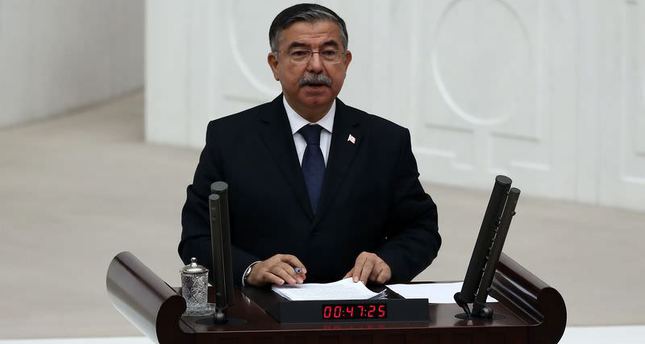 by AA Dec 02, 2014 12:00 am
Turkish Defense Minister İsmet Yılmaz has called on the European Union to remove political obstacles that block closer cooperation between Turkey and the EU on security and defense policy.

"Turkey has actively supported the development of a common security and defense policy from the outset, both as a candidate country and as a NATO ally. However, the EU has not been equally willing to foster closer cooperation with us," Yılmaz said during the opening session of the 13th Berlin Security Conference, also known as the Congress on European Security and Defense.

He criticized the EU for not inviting Turkey to be involved in the preparation and planning of EU operations to which Turkey contributed, such as the EU-led military mission in Bosnia and Herzegovina (EUFOR ALTHEA) and EULEX in Kosovo.

The Turkish Defense Minister underscored that Turkey has so far demonstrated determination to support the EU's initiatives aiming at developing its defense capabilities, including the European Defense Agency and Battle Groups.

Yılmaz expressed frustration and regret over Turkey's exclusion from the European Defense Agency and the failure of talks between NATO and the EU on an agreement on exchanging classified information.

He called on the EU to remove political obstacles that block closer cooperation in the fields of security and defense.

"We strongly believe that non-EU European allies should be involved in the EU's defense initiatives and the planning and decision-making process of common security and defense policy commensurate with their commitments and contributions," Yılmaz said.


Turkey is an EU candidate country and a key member of NATO with the second-largest army after the U.S.

Ankara is demanding stronger involvement of Turkey in the EU's security and defense initiatives on the grounds of being an EU candidate country and NATO partner.

Turkey began EU membership talks in 2005, but negotiations entered into a stalemate in 2007 due to the Cyprus issue and the opposition of the German and French governments to its full membership.

The slow progress in Turkey's EU accession talks has also undermined closer cooperation between NATO and the EU in the fields of security and defense.

As a candidate country, Turkey has to successfully conclude negotiations with the EU in 35 policy chapters, which involve reforms and adoption of European standards, in various policy areas for its EU membership.

Only one chapter could be opened in the past three years, mainly due to the Cyprus issue and the obstruction by the governments of Greece and France.