Erdoğan says new Presidential Palace is not his, but the nation’s 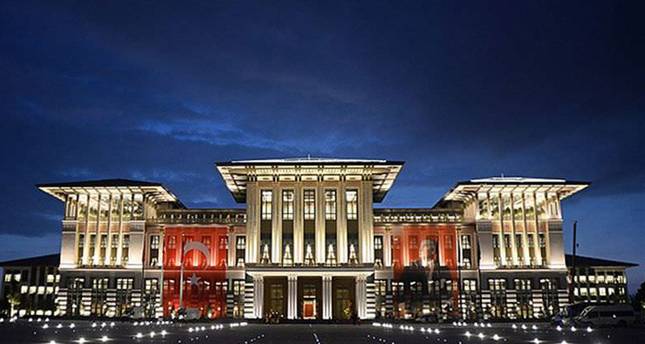 "The palace is not Erdoğan's palace, but rather it belongs to the whole Turkish nation. This is an artifact that Turkey will hand down to future generations," he said.

Highlighting the importance of the symbolic meaning of the newly built palace, Erdoğan said that the palace has started to host foreign leaders and the building would give the best answer when an outsider asks from where the country is governed.

Later, Erdoğan said that Turkey cannot accept Western hegemony in the history of the arts and sciences. "The fact that our scientific and arts achievements do not get enough appreciation in the West does not mean they are unworthy. Turkey has made very important arts contributions such as music, calligraphy, marbling and others," he said.

"Our soil brought up many valuable intellectuals for centuries," Erdoğan said. "Opinion can come into existence only if there is language. They tried to blunt our language and our national and civilization spirit in the past, but despite that, they could not exhaust the seeds of our intellectual capacity."

"Do not hope for objective points of view in a world where international institutions decide according to their own ideologies, politics and beliefs. Is the Nobel [Prize] awarded objectively? No. Does the U.N. Security Council make objective decisions? No, never," Erdoğan said.

"The U.N., which was established in the post-World War I international system, is short of representing the whole world. The entire world's destiny cannot be in the hands of five countries alone."

Erdoğan praised Turkey's presidency of the G20, which began Monday. "We are among the top 20 economies of the world," he said. "We took historical steps for democratization and development despite all the crises in our region."

The G20 is a grouping of the world's largest economies, accounting for about 90 percent of global gross domestic product, two-thirds of world population and 80 percent of international trade.

"We are a strong state with our historical heritage, civilization, intellectuals and scholars," Erdoğan said. "Those who do not believe in that can have no claim or imagination for the future whatsoever."