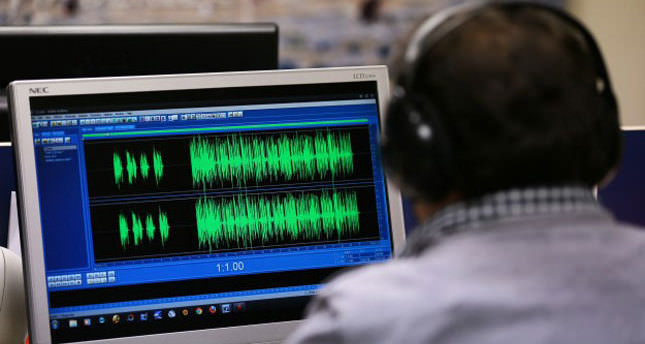 by Daily Sabah Dec 03, 2014 12:00 am
Recent investigations conducted at the Istanbul Police Intelligence Unit have revealed that agents of the Gülen Movement who infiltrated the security forces conducted 20,000 wiretappings, including listening in on former army commanders, bureaucrats, prominent businessmen, journalists and columnists from Doğan Holding, which has one of the highest numbers of personnel affiliated with terrorist organizations of all of Turkey's industrial conglomerates.

According to a recent article published in the Turkish daily Hürriyet, agents of the Gülen Movement wiretapped 160 individuals via their Electronic Serial Number (ESN), for allegedly being members of terrorist organizations, while others were wiretapped by code names under the auspices of "intelligence monitoring purposes."

It was reported that the agents wiretapped almost every executive at the Hürriyet newspaper through the phone switchboard of the newspaper.

It was also reported that thousands of phone numbers were found in the archives of the Intelligence Unit of the Istanbul Police force. The investigation lasted over two months and uncovered evidence that wiretappings had been conducted with a court ruling. The surnames of some individuals who were wiretapped were not found in the records. Likewise, the records did not contain proper information about the victims, including their jobs and duties or their backgrounds.

Others who were wiretapped by Gülenist agents within the police include those who faced charges, or had been detained and imprisoned pending trial. For instance, Soner Yalçın, who was arrested as part of the controversial Oda TV case in 2011, was wiretapped for three months in 2008. It has been reported that the wiretapping records were not included in his case files.

Likewise, Ebru Nilhan Bozkurt, who was a defendant in the Istanbul Military Spying case, was wiretapped for three months between 2008 and 2009. It was revealed that Bozkurt was accused one and a half years after the wiretapping took place, even though wiretapping records were not included as evidence in the case files.

Investigations also continue into the Istanbul Narcotics Unit and Anti-Organized Crime Police Unit in order to uncover more details about the wiretapping of 20,000 phone conversations.

The Gülen Movement is a transnational movement led by Fethullah Gülen who lives in self-imposed exile in rural Pennsylvania. The movement is accused of wiretapping thousands of people including Turkish government officials, journalists, NGOs, academics, and prominent figures. It has over 140 private schools throughout the world including the United States, Europe, Asia, and Africa, and it has been accused of infiltrating Turkish state institutions with the aim of overthrowing the government.

Turkish government officials have continuously expressed their determination to continue to lawfully pursue the Gülen Movement, whose followers are accused of infiltrating state institutions to gain control of state mechanisms, illegal wiretapping, forgery of official documents, tracing the location of phones through GPS signals and spying.

They are seen as a national threat by the government as reports prepared by inspectors from the Interior Ministry have revealed that dozens of Gülenist police officers unlawfully wiretapped thousands of people in a systematic and organized manner for espionage purposes.

President Recep Tayyip Erdoğan has previously requested the extradition of Fethullah Gülen from the U.S.