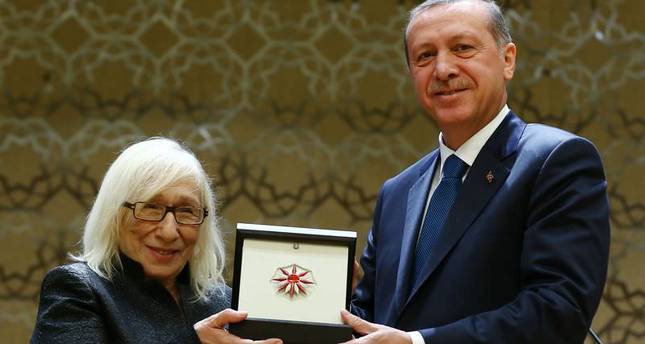 Alatlı made the comment during the Turkish Presidential Awards Ceremony on Wednesday, where she received the Grand Award in Literature.

Addressing the president at the ceremony, the 70-year-old prominent philosopher and columnist said, "History will mark you [Erdoğan] for embracing 1.5 million Syrian refugees."

She said Erdoğan has "invalidated all the oligarchies" and agreed with the comments the president made during the ceremony that "the world is bigger than five," in reference to the inequality of the U.N. Security Council. She also criticized international institutions for shaping the world in line with their own, biased ideology.

Alatlı said: "If George Orwell were alive today, he would have strongly applauded you. That would not have been enough, Daniel Defoe would have also gotten to his feet and done the same."

Erdoğan's "true friends" are artists and men of letters, according to Alatlı.

The writer also criticized her colleagues that played a role in encouraging young people to engage in the Gezi protests. She said that it was not honorable for a writer to stir the country and encourage "tempered" youngsters to hit the streets.

A wave of demonstrations and civil unrest broke out in Turkey in May 2013, initially to contest the urban development plan for Istanbul's Gezi Park in Taksim Square.

Alatlı finished her speech at the ceremony by thanking Erdoğan and his team, emphasizing her gratitude for taking part in the ceremony. Alatlı's comments brought Erdoğan's wife, Emine Erdoğan, to tears.

Alatlı, born in 1944 in the western town of Menemen, is an economist, philosopher, columnist and bestselling novelist.