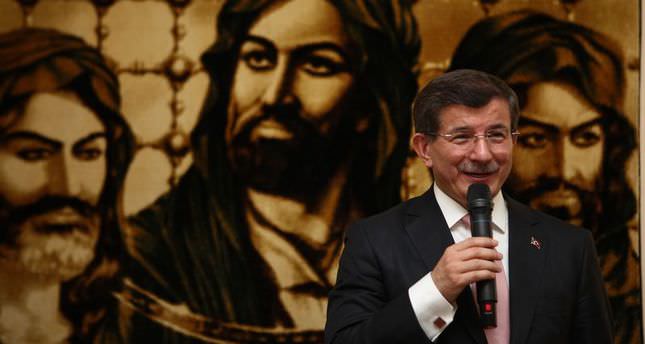 Following the European Court for Human Rights' (ECtHR) ruling that Turkey's policies regarding cemevis – Alevi houses of worship – discriminate against the Alevi community, Prime Minister Ahmet Davutoğlu said on Tuesday that the ruling will not affect the government's efforts to tackle the Alevi community's long-unaddressed grievances. "We will proceed on our way," he added as he left Parliament. The ECtHR announced on Tuesday in a landmark ruling that Turkey's policies regarding cemevis discriminate against the Alevi community. Only hours after the ECtHR ruling, Davutoğlu and 19 representatives from the Alevi community, including former deputies, politicians, academics, Alevi dedes and representatives from nongovernmental organizations gathered in Ankara on Tuesday. Reportedly touching on empathy and solidarity in a six-hour meeting, Davutoğlu highlighted the significance of equal citizenship and the Alevi-Islam tradition.

Government sources noted that the meeting was not related to the ECtHR rule.

The status of cemevis, compulsory Islamic studies subject in Turkish schools and other Alevi grievances were discussed in the meeting and Davutoğlu reportedly signaled that legal amendments will be increased to tackle the Alevi issue.

Speaking after the meeting to state-run Anadolu Agency, head of the Gazi Cemevi, Veli Gürsoy, said that the meeting was sincere and added: "We shared our demands with the prime minister in a sincere atmosphere."

Noting that the meeting lasted longer than expected, Gürsoy said that former deputies also participated in the meeting: "The prime minister said he will address our demands with sincerity and we left the meeting pleased."

Doğan Bermek, who was the former head of the Alevi Foundations Federation (AVF) and second head of the Foundation of Republican Education and Cultural Center, said that mutual respect and goodwill dominated the meeting.

Acknowledging the discrimination against Alevi communities in the Republican Era, including the Dersim Massacre in 1937 to 1938, the Turkish government has increased efforts to mend ties with the Alevis in Turkey despite obstacles. Under Davutoğlu, the efforts to tackle the Alevi question received new momentum and he has ordered his aides to work on a viable plan taking the delicate balances and realities of the country's history into account for the process. On Nov. 23, Davutoğlu went to Tunceli, the city where the Dersim Massacre took place. There, Davutoğlu visited a cemevi and met Alevi citizens to listen to their grievances. In previous years, the Justice and Development Party (AK Party) government made a series of steps to understand and respond to Alevi grievances. Accordingly, the government initiated the Alevi opening in 2010 as a belated, yet sincere attempt. The Alevi opening was also included on the government's agenda as part of the Sept. 30 democratization package, but was later postponed on the grounds that there was no institution to represent Alevis in Turkey.

The Foundation of Republican Education and Cultural Center, also known as the Cem Foundation, which manages many cemevis in Turkey, filed the case at the ECtHR accusing Turkey of constitutional discrimination since Turkish authorities refused to exempt cemevis from paying electricity bills. The foundation argued in 2006 that national legislation provides an exemption for places of worship such as mosques, churches and synagogues and the electricity bills of those places of worship are paid through a fund by the Turkish Presidency of Religious Affairs (DİB).
The foundation's application was dismissed by Turkish courts on the grounds that, according to DİB's classification, cemevis are not places of worship, but places of assembly where spiritual ceremonies are held.

The ECtHR decided that charging cemevis for electricity while exempting other houses of worship from the same is against the article related to "discrimination" in the European Convention on Human Rights. The ECtHR also stressed the fact that cemevis are sanctuaries and houses of worship.

According to the verdict, the ECtHR expects to hear from the Turkish government of the steps it will take in the next six months to rectify the injustice.

According to sources from Ankara, such a decision from the ECtHR is not a surprise for officials and it is expected that the Turkish government will gain momentum in the reform process for Alevis.

Turkey's eastern province of Tunceli, formerly known as Dersim, has significant importance to the country's age-old Alevi problem. Alevi turmoil erupted over the Dersim incident, which took place in 1937 and 1938 during the Republican People's Party's (CHP) single party era and, according to gendarmerie reports, 13,806 people were killed and thousands more were internally displaced due to the Turkish military campaign against the Alevi uprising after Turkey's 1934 Resettlement Law, which aimed to assimilate ethnic minorities.

Since the Dersim Massacre, Alevi activists have demanded to be treated as a religious minority, including official recognition and tax exemption for their houses of worship, elective subjects on the Alevi faith in public schools and greater emphasis on non-discrimination.

Visiting Tunceli to give unity and solidarity messages, the prime minister in the last week announced that the government will restore Alevi places of gathering and worship with a budget of TL 11 million ( $ 4.91 million). He added that the name of Tunceli University will be changed to Munzur University, after Alevi religious leader Munzur Baba and the old barracks in Dersim will be turned into a museum named the Dersim Museum.
It is estimated that there are over 10 million Alevi citizens in Turkey, corresponding to around 15 percent of the country's population.