16 arrested over deaths in Kobani protests 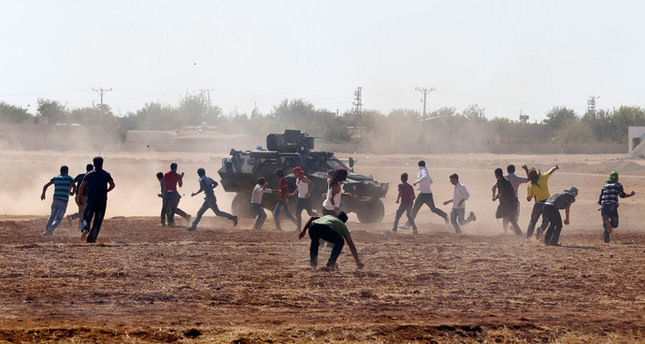 by Daily Sabah with AA Dec 04, 2014 12:00 am
Police have arrested 16 suspects for the murders of four people killed on Oct. 5 during the countrywide protests in support of Kobani, Syria, Prime Minister Ahmet Davutoğlu announced Wednesday. Davutoğlu spoke in the province of Bursa where he was attending a meeting on automotive exports and said the minister of interior had informed him of the arrests.

The Chief Public Prosecutor's Office of Diyarbakır province confirmed the arrests and said that five more were pending. The Peoples' Democratic Party's (HDP) call for street demonstrations led to hundreds of PKK supporters protesting in the streets, which turned into violent clashes between pro- and anti-PKK groups. The fierce protests on Oct. 6-7 claimed nearly 40 lives and left scores of injured people in their wake. The October protests erupted when the Syrian border town of Kobani came under attack by Islamic State of Iraq and al-Sham (ISIS) militants and it was alleged that the Turkish government was not doing enough to help the mostly Kurdish population there.