We can cooperate with al-Nusra Front, says PYD leader 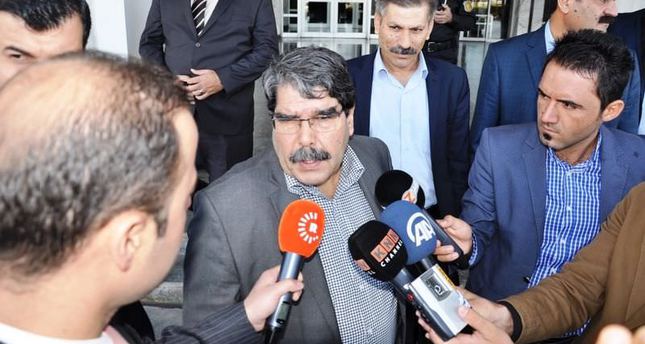 Asserting that the Islamic State of Iraq and al-Sham (ISIS) has no plans regarding Syria, Muslim said that Afrin is under the threat of the Nusra Front and the group wants what the PYD wants: a democratic Syria.

"[The PYD and al-Nusra Front's] goal is the same. We can cooperate now," Muslim said.

In August, he claimed that Turkey supported the Nusra Front against Kurds in an interview with a Turkish daily.

Noting that peshmerga units' passage into the northern besieged town of Kobani bolstered Syrian Kurdish fighters battling ISIS militants, Muslim said, "The public's morale fortified when they see the unity between the YPG [People's Protection Units of the PYD] and [Iraqi] peshmerga forces. It helps Kurds to approach each other. Before Kobani, there was unity between the YPG and peshmerga forces in the cities of Rabia and Sinjar."

Turkey allowed peshmerga forces to enter Kobani from Turkey in accordance with the Oct. 2 troop mandate to show Ankara's continued effort to help break the ISIS siege of Kobani. With this move, Ankara signaled that it is willing to do what is sees as necessary to prevent Kobani from succumbing to ISIS.

Ankara has been strongly against supporting what it sees as a terrorist organization given that the weapons provided to the organization could, under certain circumstances, later be used against Turkey. Assessing the risk, Ankara began seeking alternative ways to contribute to the anti-ISIS coalition such as proposing that the U.S. administration support officially recognized armies such as the Kurdistan Regional Government's (KRG) peshmerga forces and the Free Syrian Army (FSA) instead of the PYD's YPG.