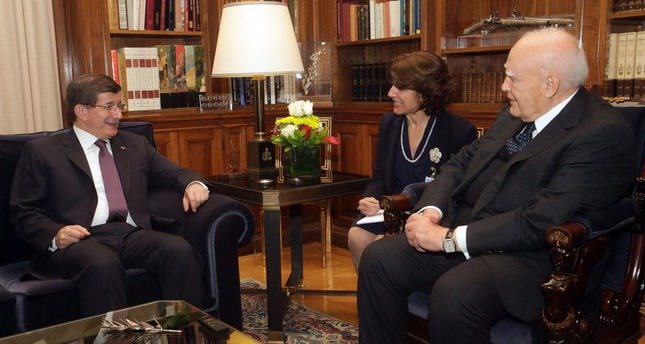 The two leaders made the commitment when Davutoglu was received by Papoulias at the presidential hall during his two-day visit to Athens on the sidelines of the third Greece-Turkey High-Level Cooperation Council.

"Such meetings reinforce the principles of good neighborhood and rules of international law, which must govern our relations," Papoulias said during the meeting, according to the Office of the Greek President.

He hailed the third council meeting and said it contributed to enhancing relations between the two countries.

The meeting comes amid high tensions between the two countries over the Cyprus issue.

Turkey and Greece are the guarantor countries for the disputed island of Cyprus where both Turkish and Greek-Cypriots are trying to find a way to settle their decades-long conflict.

"We are neighbors and we will remain neighbors, therefore, we must be good neighbors," he added.

The Turkish premier agreed with Papoulias. "Fortunately, we are neighbors. There are but a few examples of neighbors with common cultural traits and good relations," Davutoglu said.

"While everything can change, geographic location cannot change," he said.

Davutoglu also repeated his invitation to the Greek president to visit Turkey.

The Turkish premier also held a one-hour meeting with his Greek counterpart Antonis Samaras at the Greek prime ministry office before the two attend the Turkey-Greece Business Forum.

Both leaders are expected to deliver a speech at the forum and attend a dinner hosted by the Greek premier in his Turkish counterpart's honor.

Negotiations between the Turkish Republic of Northern Cyprus and the Greek-Cypriot administration resumed after a two-year pause in February 2013.

However, the Greek-Cypriot administration suspended talks over the divided island on October 7 when Turkey sent a ship to monitor an oil-and-gas exploration mission off the coast of Cyprus.

Both Turkey and the Turkish Republic of Northern Cyprus have called for a fair division of natural resources off the Cyprus coast.