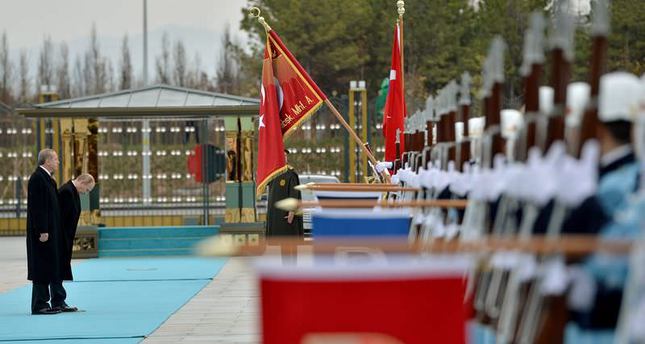 There will be a flurry of diplomatic activity in Turkey next week with many high level visits, including that of the British PM and top EU officials

There will be a flurry of diplomatic activity in Turkey next week with many high level visits expected in Ankara, including that of the British prime minister, Lithuanian president and top EU officials.

Mogherini and Stylianides will also head to Turkey's southeast province of Gaziantep, where more than 33,000 Syrian refugees have taken shelter in four different camps.

"This visit is not only important for Turkey-U.K. relations, but also for the peoples of countries and regions going through a difficult period," Erdoğan said during the fourth Turkish-British Tatlı Dil Forum on November 29.

Erdoğan had called for an intense cooperation between Turkey and the U.K. to take stable, constructive and conclusive steps in regional and global matters.

"Regional and international developments will be at the table as well as opportunities on how to carry bilateral relations a step further," Turkish Foreign Ministry said Friday.

On Wednesday, the fourth trilateral meeting of foreign ministers of Azerbaijan, Georgia and Turkey will be held in the Turkey's northeastern province of Kars on December 10.

The trilateral summit will be attended by Azerbaijan's Elmar Mammadyarov, Georgia's Tamar Beruchashvili and Turkey's Çavuşoğlu.

"Within the framework of the meeting, the ministers will exchange views on prospects for developing regional cooperation on issues of common interest and review the decisions taken at the previous meetings," Turkish Foreign Ministry said.

On Thursday, Slovakian Foreign and European Affairs Minister Miroslav Lajcak will be in Turkey to hold a press conference with his counterpart Çavuşoğlu, diplomatic sources said.

On next Friday, Greece's Thessaloniki city will host the Black Sea Economic Cooperation meeting that is expected to be attended by Çavuşoğlu, the sources added.