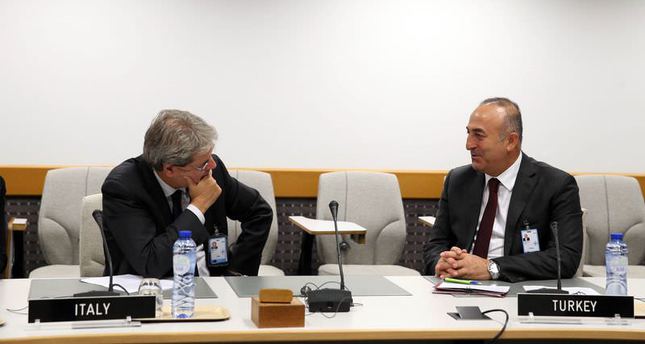 The foreign minister's comments came on Friday as he visited the Foreign Press Association in Rome.

When asked about why no new chapters had been opened since June, when Italy took over the EU's rotating six-month term-presidency from Greece - despite his country's claims to support Turkey's EU membership process, Gentiloni said: "We are closely interested in supporting Turkey in its EU journey."

"I actually recently talked to my Turkish counterpart (Mevlüt Çavuşoğlu) about this. We are working to at least raise hopes about opening some chapters."

Gentiloni said there would be progress if Chapters 17 and 19, relating to economic and monetary policy, and social policy and employment respectively, were opened.

Gentiloni said that the issue of opening new chapters would naturally be brought up when Italy's Prime Minister Matteo Renzi visits Turkey the following week.

"Despite Italy's intensive diplomatic efforts, some countries are against this. And the EU decisions are taken unanimously. That's how it works. The majority rule doesn't apply," he said.

Turkey applied for its EU membership in 1987 and accession talks on 35 negotiation chapters began in 2005.

Turkey has since seen very little progress amid opposition to Turkish membership in some EU countries, including France, and the unresolved Cyprus dispute.

Turkey has to successfully conclude negotiations with the EU in the 35 policy chapters, which involve reforms and adoption of European standards to get the membership.

So far, 14 chapters have been opened, while 17 remain blocked and a further four have yet to be discussed.

Only one chapter has been opened in the past three years.

Turkey and the EU opened accession talks on Chapter 22, which covers regional policy, after France lifted its block on the chapter in November 2013.