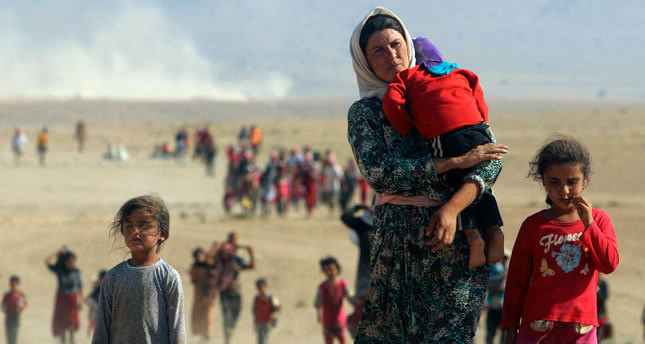 Turkey’s Consulate General in Iraqi Kurdistan’s capital Irbil said that with the order of President Erdoğan, Turkey became the only country that built shelters for those who escaped from ISIS militants and went to the KRG region

Ever since the regional conflict caused by the Islamic State of Iraq and al-Sham (ISIS) began almost 2 million people have been internally displaced in Kurdistan Regional Government (KRG) controlled areas. Amid the conflict and financial difficulties, the KRG government has been trying to set up camps to provide shelter for refugees fleeing ISIS, and according to Turkey's Consulate General in Irbil Mehmet Akif İnan, Turkey is the only country that has established camps for ISIS refugees in the region.

Since the outbreak of the Syrian crisis, Turkey has taken in more than 1.6 million refugees, including 200,000 Kurdish refugees who have fled the ISIS crisis in recent months. In addition to these humanitarian efforts within its borders, Turkey also became the only country that built shelters for ISIS refugees in the KRG region. "Due to the ISIS threat, there are about 2 million internally displaced people in the KRG region, and the UN High
Commission for Refugees and other aid groups have been working with the KRG government to set up camps where these people can be sheltered, but Turkey is only the country that has built camps for ISIS refugees in the KRG region," İnan said.

Speaking to Daily Sabah, the Turkish Consulate General in Irbil said that there are 16 refugee camps that were mostly built by the KRG government, while Turkey's Disaster and Emergency Authority (AFAD) has recently built two refugee camps in the KRG region to help sheltering efforts. "There is already really good cooperation between Turkey and the KRG in various fields, and since the outbreak of the ISIS crisis, we have added a humanitarian dimension to our cooperation," İnan added.

AFAD has built two refugee camps in the Zaho and Dohuk districts of the KRG, which accommodate 35,000 of Iraq's displaced citizens fleeing the advance of the ISIS terrorist group. In September, KRG Prime Minister Nechirvan Barzani visited a refugee camp set up by AFAD in Dohuk. "Turkey has extended its helping hand, not only in the current situation but also after many disasters that we experienced in the past," Barzani said during his visit. On Nov. 21, Prime Minister Ahmet Davutoğlu visited the Yazidi refugee camp set up by AFAD in the Zakho district of Dohuk city.

This Wednesday, AFAD transferred management of two of its refugee camps, both located in northern Iraq, to Iraqi authorities. Turkish Consul General in Irbil İnam and Dohuk Governor Ferhat Etrusi both attended the ceremony.