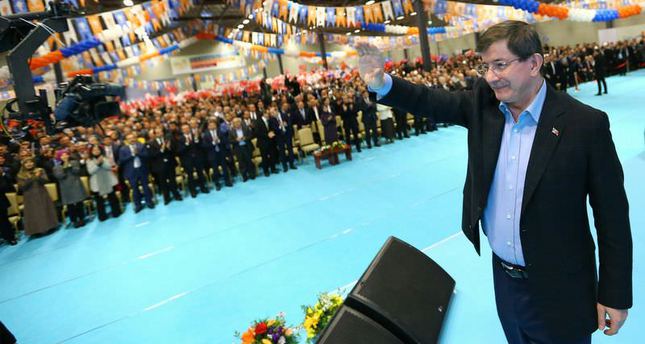 Some 42 percent of Turkish voters support current Prime Minister Ahmet Davutoğlu, who was chosen to be the country's prime minister, replacing Recep Tayyip Erdoğan, in August.

This figure rises to 88 percent for voters from the ruling Justice and Development Party (AK Party).

The figures were obtained from a poll recently conducted by the AK Party's newly-formed Election Strategy Committee, which will focus on the party's strategy for the upcoming 18th general election due to be held on June 13, 2015.

According to the poll, nearly half of Turkish voters support Davutoğlu, who replaced Erdoğan in August. Erdoğan became president on Aug. 28 2014.

A further 16 percent of those interviewed are not sure about their support for the prime minister, responding "maybe" to the question of whether they support him, according to the poll.

The newly formed committee has evaluated Davutoğlu's performance during his tenure thus far by asking respondents to react to statements such as "Davutoğlu has made a strong impression on people."

According to the survey, Davutoğlu's rallies are "successful." It also said that AK Party voters believe in the prime minister and his "vision of a new Turkey."

Another evaluation by the committee was that AK Party voters are not "disturbed" by the new Presidential Palace built in the capital city of Ankara. The AK Party has drawn criticism from opposition parties for the construction of the new palace, concluding that the palace is "too big and expensive."

Erdoğan has responded to this criticism by saying, "The palace is not Erdoğan's palace, but rather it belongs to the whole Turkish nation." He said, "This is an artifact that Turkey will hand down to future generations."