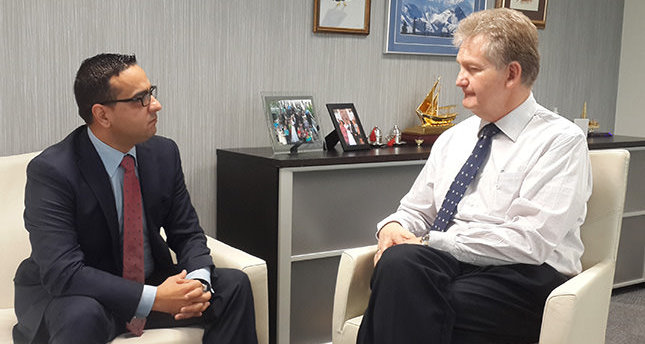 Amid the serious discussions about Turkey’s chance of becoming an energy hub after Russian President Putin’s crucial visit to Turkey, Daily Sabah spoke to the President of BP Turkey, Bud Fackrell, over the Southern Gas Corridor, possible effects of energy prices on Turkey’s economy and the country’s aim to be an energy hub

Last week's announcement by Russia that it was ditching the South Stream project has led to serious discussions about Turkey's chance of becoming an energy hub. In addition, Turkey is currently working on several other projects such as the Southern Gas Corridor, which was proposed by the EU, and other possible projects. Daily Sabah talked to Bud Fackrell, president of BP Turkey, on the Southern Gas Corridor, the impact of energy prices on the Turkish economy and Turkey's chance of becoming an energy hub.

- Due to the shale gas revolution in the U.S. and the slowdown in the global economy, the price of oil has slumped by more than 30 percent since mid-June. How would you evaluate the impact of the recent decline in oil prices on the Turkish economy?

If prices remain low for a long period of time, some energy company projects may not be economic. That will mean the supply of hydrocarbon sources will drop. This has a tendency to balance our supplying the ban and plays itself out over the long term. That's why we, as the company, do not react to mean drops and increases in pricing. We try to build our projects based on long-term forecasts because energy projects take a long time.

- BP has been operating in Turkey for over a century and your company is one of the oldest foreign investors in Turkey. How would you evaluate the future of the Turkish economy?

As you've said, BP has been in Turkey for 102 years, longer than the Republic. Turkey is a strategic partner for us. That may sound like an odd statement for a big export and production company when there are no hydrocarbon sources found in Turkey, but the reason for this is that Turkey is a bridge between oil and gas resources in the East and markets in Europe. We have big companies and industry businesses. It is very important to be in Turkey because it helps us to achieve what we are trying to do in the region. Our strategy is compatible with the country's strategy. What I mean by that is one of the big projects that we are working on is the Southern Corridor Gas Pipeline. It is very important for Turkey and for BP to take Azerbaijani Caspian gas resources and get them to markets in Turkey and in Europe.

- So in the eyes of a century-old foreign investor such as BP, how would you evaluate the current climate for doing business in Turkey?

We make investments over the long term, not just for what happens today. We look at the past and the future, and although there has been some turmoil this year, Turkey has been a very good place for BP to invest, and we'll continue to do that. Even compared with a couple of years ago, there have been forecasts showing that Turkey will grow 3 percent to 4 percent a year. That still sounds positive for us to keep our strategy here.

- BP is currently the operator of the BTC (Baku-Tbilisi-Ceyhan) pipeline company and developing a giant gas project, Shah Deniz Stage 2, in Azerbaijan with its partners and last year decided to take 12 percent equity in the multi-billion dollar TANAP (Trans-Anatolian Gas Pipeline) project. How does BP perceive Turkey's future in terms of energy security as a company that continues comprehensive investment in the region?

These are very important for BP and the energy security of the region. The Southern Corridor gas pipeline network is changing the energy map of this region. For the first time, we will be taking gas resources from the Caspian and will be feeding them to Europe. It's an absolute game changer. BP has equity ownership in Caspian resources – that huge Shah Deniz field. It's important to get that gas to market. Secondly, that gas is also going to supplement the gas coming to Turkey. BP is already supplying Azeri Caspian gas to Turkey and we are going to increase that. We are going to send 6 billion cubic meters (bcm) of natural gas to Turkey and 10 bcm to Europe. If we extend this issue, what it means is it is not just TANAP, it is the Southern Corridor. The Southern Corridor includes expanding the Caucasus pipeline, Azerbaijan and Georgia. Building the TANAP pipeline and Transatlantic Pipeline (TAP) to Greece and Albania and to Italy under the Adriatic – that's the Southern Corridor and TANAP is a huge piece of it. It's right in the middle of it. Clearly 10 bcm of a 450 bcm European market is very small, but this is a start. We are building the system to be able to expand it. We also anticipate in the future that we may supply 10 percent of the gas to Europe. So it diversifies your supply. We also have large Caspian gas resources; they are not being monetized. They strand it. That's the game changer nature here. You start that network through the geography of Turkey. Turkey also wants to be a gas hub. The Southern Corridor TANAP is a first step to achieve it. There may be other pipelines coming through Turkey as well, but all these things have to have a place to start, and sometimes the first piece becomes the most difficult.

- Do you think the Southern Corridor or TANAP project is enough for Turkey's becoming a gas hub? As a thing has been very ambitious?

This project is just the start of Turkey's becoming a gas hub. Not just the 16 bcm of gas, it has a 56-inch pipeline. We can easily double the volume by adding few compressor stations. If you look around the region, I've already mentioned what BP is doing in the Caspian Sea. The KRG (Kurdistan Regional Government) and northern Iraq have gas resources. The Eastern Mediterranean does too. Despite many political issues that need to be resolved, we have to make the first move, even if it's the most difficult part, by starting a project, which is TANAP. We are putting together a "gas value chain" that has links that have to be connected together. Here, there is a very complicated gas value chain. We are going to invest $45 million for the partnership including seven countries. When we look at the Baku-Tblisi-Ceyhan (BTC) pipeline, people in the beginning were saying this couldn't be done. However, that pipeline reshaped the oil map. Most of the oil resources from the Caspian Sea are coming through this pipeline. I think it was the beginning for the Southern Corridor pipeline because it showed us that this could be done. The other complicated point is you have to have agreements between governments. BTC demonstrated that those could be done by parliaments and governments. We now have agreements between seven countries. So, these are the foundations of Turkey's becoming a hub in the future.

- Can we say that Kurdish gas will not affect TANAP or the Southern Corridor project?

KRG gas coming to Turkey may actually help TANAP in the Southern Corridor. KRG gas may come into the BOTAŞ system initially and feed Turkey's domestic market. But as they expand, they are going to export gas out of Turkey. TANAP then could be an option for them. The owners of TANAP will consider additional sources of gas to fill up their pipeline because we built the system to expand it, not just for 16 bcm. As an example, there is a movie called "Field of Dreams;" Kevin Costner is the lead actor. It is about baseball, and there is a line in that movie that says, "If you build it, they will come." The same is valid for the Southern Corridor pipeline. If we build, gas will fill it up, and it will not be limited to 16 bcm. We are going to have much more than that.

- So can we describe the Southern Corridor project as a "win-win" situation then?

It's actually win-win-win and four more wins. First, Azerbaijan has gas resources, and they want to market in Europe. Second, it's a win for Europe since it wants to diversify the gas supply. Third, Turkey wants additional gas resources coming to Turkey. So they have secured the supply for their own economy, and they can be competitive in price. Fourth, it's a win for BP because we have equity ownership in the Shah Deniz field – BP is the only international company that has invested in every piece of the Southern Corridor.

- The latest market reports also predict that low oil prices will continue in the foreseeable future. Do you think that this will cause any cancellation or postponement in your planned investment in Turkey and/or in the region?

One thing we don't do is forecast oil prices because the forecasts will be wrong – BP makes decisions on projects in the long term. A drop in oil prices will not have an impact on our policies in the Southern Corridor. We are committed to that. Likewise, when you look at other projects around the world and if we have a continued period of low prices then clearly, we would have to look at some projects that may not be economic. Right now, we're working on plans that we have already laid out. However, for the long term, like any good business, you look at the prices and economics, but for now, this would not affect the Southern Corridor.

- In the BP energy outlook, it is said that even if there is an increase in the share of renewable energy in total energy consumption, hydrocarbons will continue to play a pivotal role in the global economy. Would you like to add more to that?

Every year BP puts it energy outlook out. The last one published as an outlook for 2035. What we found is that renewables are continuing to grow, but energy consumption in the world is so large and hydrocarbons are going to grow as well. After 2035, in particular, natural gas is going to grow but not at the same pace as renewables do. Our world is hungry for energy and renewables are not in a position to satisfy this urgency. However, not as fast as the renewables, but we have to balance here that we need a bit to be practical about the need for the energy.

- It is widely thought by the public that most of the conflicts in the Middle East are caused by oil companies, and oil companies have been associated with many conspiracy theories. What could you say about this issue?

People love conspiracy theories and love to blame oil companies. But if you stand back and look at it, there are two things that we do to ensure that we have integrity in the way we conduct our business. First, every country we are in has very strict laws about compliance with regard to how we do our business. When we are in a country, we make sure that we comply with the laws there and international standards. Here in Turkey, we are complying with Turkey's environmental and other regulatory laws as well as international standards. Secondly, inside BP, we have a very strict code of conduct that we must follow. People must obey this contract. Regarding these two things, I can say that people need to re-visit their conspiracy theories.