President: Turkey is against the denial of religious rights and assimilation 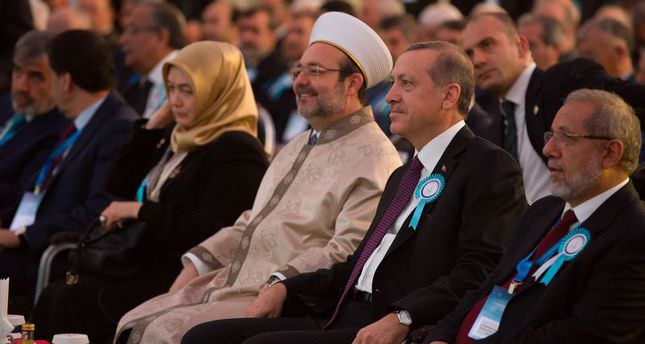 by Daily Sabah with AA Dec 08, 2014 12:00 am
President Recep Tayyip Erdoğan has stated that Turkey is against all measures which deny religious rights and assimilation, while noting that Islamophobes blame the Islamic religion for a lack of progress in Muslims societies. He made the comments during a speech at the 5th Religious Council in Ankara.

"I believe I am obliged to encourage all segments of the society to openly and freely discuss all issues and problems related to religion" said Erdoğan, who noted that some issues have not been addressed by the government in the past due to peer pressure.

He stated that ignorance and devotion to religion have previously been considered to be the same. "This was the reason behind the prohibition of learning how to read the Holy Qur'an and the recitation of call to prayer in Turkish rather than Arabic" said the president, who noted this mindset has imposed restrictions on freedom of religion and expression and has discriminated against women who wear a headscarf. "While politicians defending the natural rights of religious people were labeled as backwards or even executed, the efforts of pseudo scholars to poison Turkish society were supported for decades and even encouraged." Erdoğan said.

Religion and devotion to religion have unfairly been insulted under the name of freedom of expressions according to Erdoğan, who stated that politicians and figures who defended the protection of religious rights have been persecuted and even hanged.

Erdoğan stated that he was harshly attacked when he criticized those who oppose compulsory religion classes in elementary schools and when he said Turkey should openly talk about World War I.

"There is no cooperation and common understanding among the Islamic world" said Erdoğan, who stated this is one of the reasons why Muslim states remain silent while Palestinians, Syrians and other Muslims are being killed.

"We are going beyond the banalities taught to us for 200 years and are finally asking the right questions. While the West wants us to keep quiet, we continue to defend Palestine, democracy in Egypt, justice in Syria and to criticize the structure of the UN," Erdogan said, reiterating criticism of the UN Security Council for allowing only five major powers to effectively make all decisions.

"We continue to say that the world is bigger than five, but abandoning such a reign does not suit them," he said.

"If we appropriate our heritage well and break away from all those roles the West cast on us in the global system, we can lead a role in sustaining solidarity and justice in the Muslim world and in stopping bloodshed in the Middle East and Africa," he added.

The president argued that those who nurture enmity towards Islam and religion and its existence in the public sphere are actually creating their own religion under the name of "citizenship" and nationalism.

"This is why we emphasize confidence, normalization, and courage" said Erdoğan, stating that he is in favor of a democratic and free environment for all citizens in Turkey.

"Objections to learning our ancestors' language are very dangerous," he said. "Ottoman era Turkish will be taught in schools so youth can learn their history, like it or not."