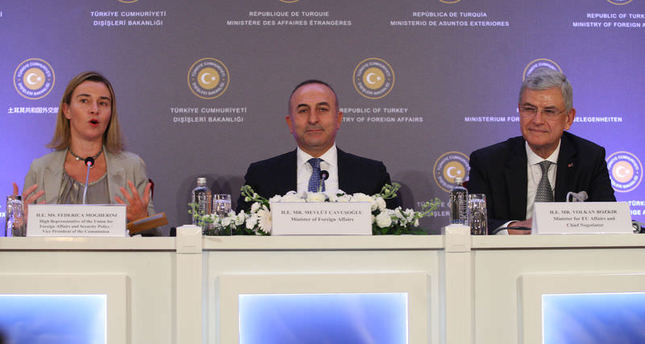 by AA Dec 08, 2014 12:00 am
Amid a visit by the European Union's foreign policy chief to Turkey, the country is stepping up its efforts in long-stalled membership talks, recently announcing new 'action plans' in an attempt to revive the accession process.

However, the newly elected president of the EU Commission, Jean-Claude Juncker, has already announced the he does not foresee enlargement rather "consolidation objectives" over the next five years.

Can Baydarol, founding member of the Ankara-based European Union and Global Research Association, says the EU has changed its political composition considerably amid the rise of extreme-right wing parties in Europe in recent years.

Referring to latest changes that Turkey intends to realize with 'action plans', Baydarol said although the [EU] Commission said it has decreased its interest in enlargement, Turkey wouldn't stop making reforms.

Bozkır listed the three main pillars of the plan as "determination in the political reform process, continuity in socio-economic transformation in the accession process and effectiveness in communication" during a press conference in October.

Proposals contained in the plan would see major changes to how victims of crime are supported and compensated.

Selcen Oner, assistant professor at the Department of EU Studies at Bahçeşehir University in Istanbul, said the biggest challenge for Turkey's accession is the Cyprus issue and the slowed momentum of the reform process.

"There are also still crucial deficiencies, especially concerning freedom of speech and freedom of media in Turkey, which were expressed also in the Progress Reports by the Commission for Turkey in recent years," she added.

The EU's 2014 annual progress report assessing Turkey's preparedness for EU membership criticized the country over "government interference" in the judiciary and bans imposed on social media.

On the other hand, the report praised the country for its "invaluable support" for Syrian refugees.

The report also said the EU supported Turkey's ongoing efforts to solve the three-decade conflict between Ankara and the outlawed Kurdistan Workers' Party amid a rise in tension brought on by fighting between the self-proclaimed Islamic State of Iraq and Sham (ISIS) militants and Kurdish fighters in the Syrian city Kobani, just kilometers from Turkey's southern border.

The PKK is listed as a terrorist organization by Turkey as well as by the EU and the U.S.

Oner highlighted the importance of the national action plan, which she thinks will play a crucial role in terms of adapting to the EU and improving living standards for Turkish citizens.

Speaking to The Anadolu Agency before her Monday journey to Turkey, the High Representative of the EU for Foreign Affairs and Security Policy, Federica Mogherini said her visit would accelerate relations between Turkey and the EU as well as signifying a fresh start to "strategically important" bilateral relations between the two parts.

Senem Aydın Düzgit, associate professor of international relations at Bilgi University in Istanbul said Turkey is not in the right condition to become a full member of the EU right now due to political blockages in the bloc.

"However, technical adjustment processes are still going on. Turkey needs to continue with reforms as it has to do so," she said.

Negotiations for Turkey's accession to the EU began in 2005. Turkey must comply with 35 chapters setting out reforms needed to become a member. So far, only 14 have been opened while 17 remain blocked and a further four have yet to be discussed at all.

Turkey continues to pursue EU membership and is ready to open negotiation chapters 23 and 24, on "judiciary and fundamental rights" and "justice, freedom and security" respectively.