Davutoğlu: ‘We agree to lift the visa requirement for Polish citizens’ 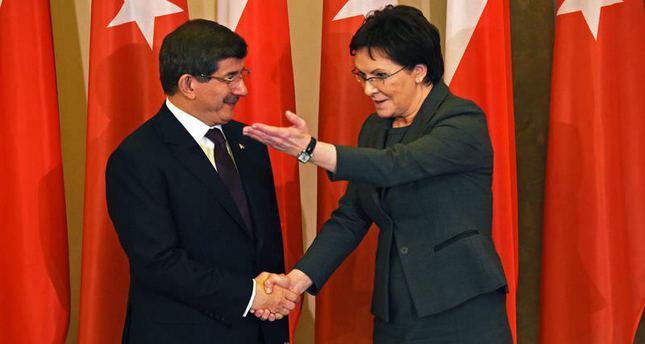 by Daily Sabah Dec 09, 2014 12:00 am
On his official visit to Poland, Prime Minister Ahmet Davutoğlu said on Monday that the Turkish government decided to lift the visa requirement for Polish citizens with the aim of increasing interaction between the two countries.

Davutoğlu also highlighted that Kopacz pledged to give full support to Turkey for Schengen visa liberalization and added that when air transport between the countries is increased, Turkish citizens will be able to move throughout the EU with the support of Poland.

Kopacz said in the joint conference, "We need to provide a convenience to Polish citizens visiting Turkey and Turkish citizens and students visiting Poland."

Regarding the decision to lift the visa requirement for Polish citizens, Kopacz touched on the importance of Polish tourism for Turkey.
"Poland always supports Turkey and its interests," added Kopacz.

Highlighting that cooperation between the two countries has been increasing on the NATO and the U.N. level, Kopacz said, "I hope we can continue this cooperation as EU member countries."

Noting that Turkey and Poland are in full solidarity to direct their own futures, Davutoğlu said the relation between Turkey and Poland is one of the oldest diplomatic relations in Europe to stress the intense bilateral ties between the countries.

Davutoğlu has also met with representatives of the Turkish community in Poland and delivered a speech at the closing ceremony of the 600th anniversary celebration at Poland's leading art institution, Teatr Wielki, where a number of Turkish artists were presented---presented with what? Or were they introduced?.

The Ukrainian crisis on the Baltics and Black Sea line, along with the latest crisis in the Middle East and other international issues were discussed in Davutoğlu's two-day Poland visit.

The visit came one week after Polish politician and former premier Donald Tusk replaced Herman Van Rompuy as president of the European Council, and will also mark the 600th anniversary of diplomatic relations between Poland and Turkey.