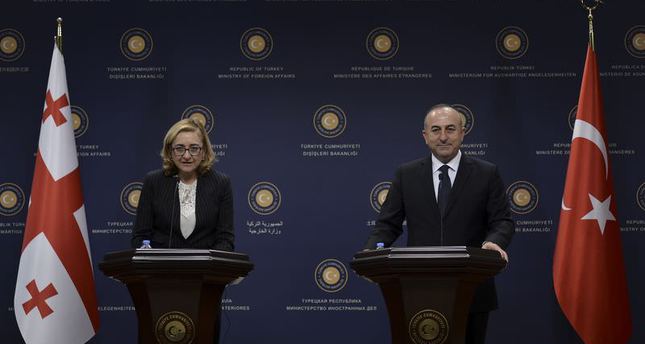 by Daily Sabah with Agencies Dec 09, 2014 12:00 am
Foreign Minister Mevlüt Çavuşoğlu said in a joint press conference on Tuesday that studies of the train and equip agreement between Washington and Ankara have been continuing and the locations which the moderate Syrian opposition groups are to be trained in in their fight against the Islamic State of Iraq and al-Sham (ISIS) have been decided.

Speaking in a joint press conference as part of Georgian Foreign Minister Tamar Beruchashvili's visit to Ankara, Çavuşoğlu said that the U.S. and Turkey are yet to reach an agreement over the no-fly zone and safe zone that Ankara has been demanding since the beginning of the Syrian civil war in 2011.

"What we aim [with the train and equip program] is to stabilize Syria and Iraq and manage a political transformation. Several steps need to be taken," Çavuşoğlu added.

The NATO-Georgia Commission was established in September 2008 to serve as a forum for both political consultations and practical cooperation to help Georgia achieve its goal of NATO membership.

Saying that Turkey and Georgia are close strategic partners, Beruchashvili added, "We reiterated our readiness to deepen relations in all areas of mutual interest."

Çavuşoğlu also said that Turkey does not recognize the agreement signed between Russia and Abkhazia, which is a breakaway region in Georgia.

Çavuşoğlu and Beruchashvili signed a cooperation protocol and exchanged views on regional and international developments.

Beruchashvili said: "The document [between Russia and Abkhazia] infringes on Georgia's sovereignty and territorial integrity and constitutes a major step toward the annexation of Georgia's occupied region."

Russia and the self-proclaimed independent area in Georgia signed a strategic alliance agreement on November 24, which includes a controversial collective defense pact.

The agreement says that within three years, Russia and Abkhazia will establish a joint military force and the Russian army has pledged to modernize the Abkhazian forces.