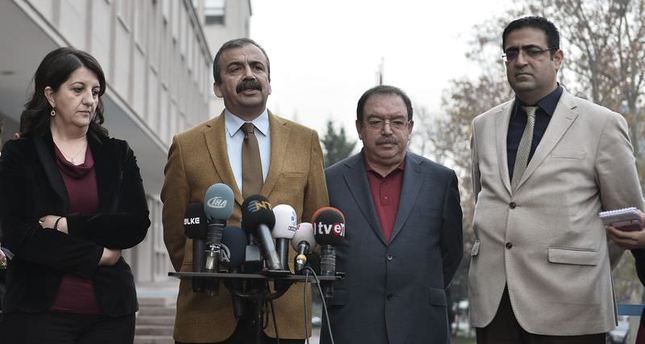 by Daily Sabah Dec 09, 2014 12:00 am
The Peoples' Democratic Party's (HDP) İmralı Committee, with the exception of Istanbul Deputy Sırrı Süreyya Önder, visited the Qandil Mountains in Iraq to discuss the details of the meeting held between the committee and Deputy Prime Minister Yalçın Akdoğan on Monday as well as the meeting between PKK's imprisoned leader Abdullah Öcalan in İmralı Prison on November 29 with the Kurdish Communities Union (KCK).

The committee is expected to discuss details of the 'Democratic reconciliation and negotiation draft' which was presented by PKK's imprisoned leader Abdullah Öcalan with the KCK. Pervin Buldan, who is one of the members of the İmralı Committee and HDP's deputy chairwoman has stated that they are visiting the Qandil Mountains to evaluate the conclusions reached at the meetings held between the committee, the government and PKK's imprisoned leader Abdullah Öcalan.

It was reported that the committee will be holding meetings with the government when they return from the Qandil Mountain and convey the messages of KCK's administration pertaining to the draft plan. They will be visiting Öcalan afterwards to discuss the current state of events and the situation of the reconciliation process.

The committee held a meeting with Yalçın Akdoğan on Monday and HDP's Istanbul Deputy Sırrı Süreyya Önder stated that there are no problems with expanding the number of members in the İmralı Committee.

They released a statement following their visit to the PKK's imprisoned leader Abdullah Öcalan in İmralı Prison and said they are expecting to reach a serious democratic conclusion of the Kurdish reconciliation process within the next five months.

Turkey's Deputy Prime Minister Bülent Arınç had previously told the HDP to stop shuttling between the PKK headquarters in the Qandil Mountains in Iraq and its imprisoned leader, Abdullah Öcalan, and instead draw its own road map for the settlement.

The PKK leadership in the Qandil Mountains and leader Öcalan have a perceived disagreement on the ongoing peace process, and the KCK is considered to be an umbrella organization of the PKK.

The "reconciliation process" initiated by the AK Party government began when a ceasefire was signed between the Turkish government and the PKK followed by a series of democratic reforms to improve the rights of Turkey's Kurdish population. It is reported that over 50 percent of the people in throughout the country are in favor of the initiative.