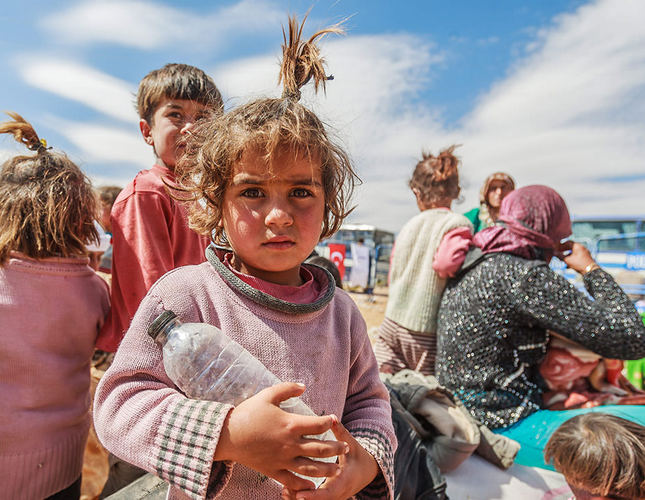 Sheltering nealrly 2 million Syrian refugees fleeing the civil war and ISIS, Turkey was the top country delivering international aid based on gross national product in 2013, according to a state-run aid agency’s report

According to the 2013 Turkey Development Aid Report, Turkey ranks first among countries delivering international aid based on gross national product (GNP). In 2013, Turkey delivered $4.347 billion in humanitarian aid through official channels and nongovernmental organizations (NGOs), according to the report prepared by the government-run Turkish Cooperation and Coordination Agency (TİKA).

The data by the Organization for Economic Cooperation and Development's (OECD) Development Cooperation Directorate (DAC), said that Turkey is also the fourth donor after the U.S., the EU and the U.K. overall, and Turkish NGOs delivered $280.23 million in humanitarian aid.

In terms of geographic distribution, 55.9 percent of development cooperation projects were launched in the Middle East, while 24.7 percent were launched in Africa, 15.3 percent in South and Central Asia and 3.1 percent in the Balkans and Eastern Europe. In 2013, Turkey extended its helping hand to nearly 120 countries, including Afghanistan, Yemen, Haiti and the Philippines. The three countries that benefited most from Turkey's humanitarian aid were Syria, Egypt and Kyrgyzstan, respectively. The cost of humanitarian aid to Syria totaled $1.638 billion while humanitarian aid to Egypt totaled $538.83 million.

In total, 49 percent of the official development aid given was humanitarian, according to TİKA's report. A statement by Deputy Prime Minister Numan Kurtulmuş in the report said, "Our country exerts efforts to dominate the language of peace by addressing crisis regions. [Turkey] contributes concretely to the countries that the political instability has impacted on the humanitarian level such as Somalia, Myanmar and the Central African Republic, and directly touches the desperate lives there."

Touching on the nearly 2 million Syrian refugees fleeing the Syrian civil war and the threat caused by the Islamic State of Iraq and al-Sham (ISIS) in the region, Kurtulmuş said, "Our country followed its open door policy in 2013 and the number of Syrian refugees sheltered in Turkish refugee camps surpassed 210,000."

The statement added that it is a humanitarian duty to extend a helping hand to these refugees who are sheltered both in the refugee camps and outside those camps. In his statement printed in the report, TİKA head Serdar Çam said that Turkey continues to put into practice its technical, social, educational, economic and cultural abilities in parallel with the development in Turkish economy.