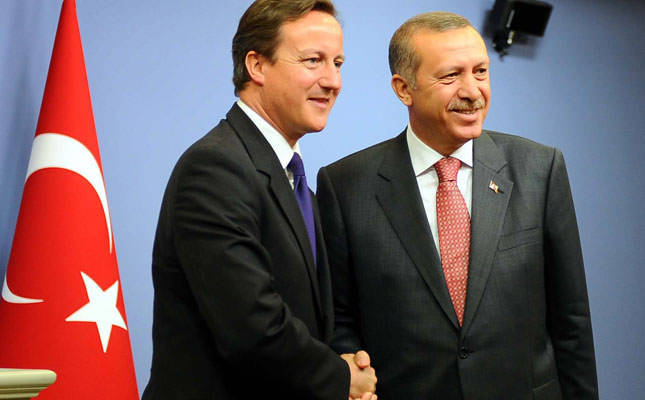 British PM Cameron arrived in Ankara to discuss ways to increase cooperation to tackle regional crises, especially on the hundreds of ISIS militants returning to Europe, which reared them

British Prime Minister David Cameron arrived in Turkey yesterday for a two-day official visit amid the intense week of diplomatic visits in Turkey.

Among the issues that the countries are expected to bring to the table, and the one that will draw the most attention, is the matter of British foreign fighters who left the U.K to join the Islamic State of Iraq and al-Sham (ISIS) by travelling through Turkey en route to fight against the increasing crisis in Syria.

Cameron, who paid his first official visit to Turkey when he first took office in 2010, met with Prime Minister Ahmet Davutoğlu in Ankara and is expected to hold a joint press meeting after Daily Sabah went to the press. Later on in the day, Cameron will meet with President Recep Tayyip Erdoğan at a working dinner on Tuesday.

Describing the purpose of the visit, Cameron's spokesman told reporters in London, "Counterterror is front and center." According to sources from the U.K. Prime Ministry, Cameron will seek further cooperation in the sharing of flight lists from Turkey to the U.K. and discuss tighter restriction on border controls to prevent foreign fighters from returning to the U.K.

Many of the some 500 Britons who are believed to have travelled to the region have used Turkey as a transit point and around half that number are believed to have returned to Britain. Due to the increasing ISIS threat in EU countries, officials warn of possible ISIS attacks with the return of ISIS militants who are EU citizens back to their home countries.

In a speech at the House of Commons in September, Cameron echoed the European Council's belief that ISIS is a direct threat for every European country and said Turkey and the U.K. have been cooperating on security intelligence and other issues that they never had before to take precautions to prevent militants from returning to the U.K.

In November, Cameron outlined a bill to seize the passports of U.K. citizen foreign fighters to stop them returning from fighting overseas. There will also be new rules to prevent airlines that do not comply with no-fly lists or security screening measures from landing in the U.K. Cameron also wants Turkish commercial airlines to do more to identify British fighters flying to or from the region.

Touching on the issue in his speech at U.N. Security Council in September, Erdoğan said: "The foreign terrorist threat needs to be addressed, starting with the countries where these terrorists come from. Turkey's priority is to prevent foreign fighters from entering the country."

"ISIS is a bloody terrorist organization and the Turkish government has taken all legal measures against this group from the very beginning," Erdoğan said.

"The countries of [their] origin have recently started to share intelligence with Turkey as the gravity of the threat has increased," he added during the talks at the U.N. headquarters in New York. There is a strong relation between the U.K. and Turkey as London supports Turkey's EU bid and both countries are considered as close allies in the Middle East.

"This visit is not only important for Turkey-U.K. relations, but for the peoples of countries and regions going through a difficult period," Erdoğan said during the fourth Turkish-British Tatlı Dil (Sweet Talk) Forum, an annual meeting that was inaugurated between the governments of the U.K. and Turkey at the prime minister level in 2011 to describe the strong cooperation between the countries.

During Cameron's visit to Turkey in 2010, he described Turkey-U.K. relations by saying, "Turkish-British relations are in their golden age." In addition to the issue of foreign fighters, Turkey's presidency of the G20, how Britain can help Turkey deal with 2 million Syrian refugees in Turkey, the Cyprus issue and Turkey's EU bid are among the issues to be discussed.