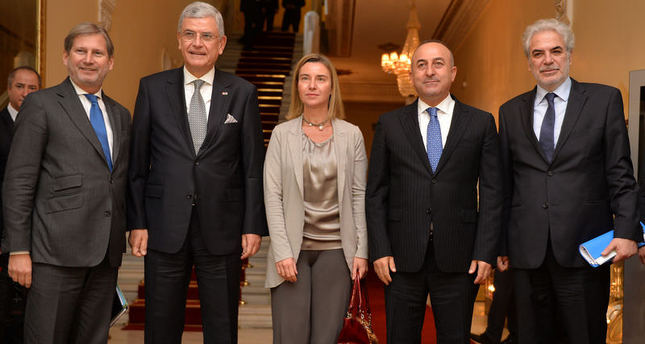 Senior Turkish and EU officials resolve to bring a new momentum to membership negotiations, and discuss ways to formulate a common stance toward regional crises

In a meeting with Prime Minister Ahmet Davutoğlu at his official residence, EU officials discussed the state of affairs of Turkey's EU accession process, the visa liberation issue and the dynamics of common strategy for the crises in Ukraine and Middle Eastern countries.

Before his visit to Warsaw, Poland, Davutoğlu spoke highly of the meeting with the EU delegation in a press meeting: "We are determined to bring new momentum to this process. This visit of the delegation is a significant and positive step for its future."

He also said that he will pay a visit to Brussels this coming January.

After meeting with Davutoğlu, the EU delegation came together with the minister of foreign affairs, Mevlüt Çavuşoğlu, and EU Affairs Minister and Chief Negotiator Volkan Bozkır. They discussed the thorny issue of Cyprus at a luncheon with both ministers and addressed the press afterward.

In the press conference, EU commissioner for enlargement and European neighborhood policy, Johannes Hahn, indicated that they expect to open one or more negotiation chapters during the next term of the presidency and the "new EU commission is ready for doing its best in speeding up the process."

Hahn said: "We know that Turkey's aim is to work with European standards in the proper sense and it is among Turkey's most important objectives. However, we need to have vitally close economic relations and those need to be maintained more intensively as well. In this sense, some requirements in reforms, especially on law and fundamental rights, still continue. Nevertheless, speaking of the process, I want to express that the new EU Commission is ready for doing its best in speeding up the process."

Foreign Minister Mevlüt Çavuşoğlu, after the meeting, underlined that vital issues for EU-Turkey relations were discussed and bilateral relations are about to gain a different dimension. He said: "We reviewed the accession process, the Cyprus issue, visa dialogue, EU summits and international development in our meeting with their participation. Turkey's EU membership will lead to new opportunities with a 'win-win' perspective. Progress in negotiations is the best option for everyone."

Following the meeting and press conference, the delegates met President Recep Tayyip Erdoğan at the new Presidential Palace as their last contact of that day in Ankara with Turkish officials.

The EU delegation will also visit the Kilis and Öncüpınar refugee camps on Tuesday where almost 40,000 Syrian refugees live.

The EU Commission is set to provide a major financial aid package to Turkey for sheltering the thousands of refugees who have fled from conflicts in Syria and Iraq. "We are finalizing a further package of 70 million euros to Turkey," Mogherini said at a press conference with Çavuşoğlu and Bozkır.

More than 190,000 people have been killed in Syria since the conflict between the regime and opposition forces began in early 2011, according to U.N. figures published in August. As a country housing many refugees, Turkey has spent $4.3 billion in humanitarian aid through its official channels and non-profit organizations around the world. Currently, there are more than 1.6 million refugees in Turkey. "The EU intends to be one of the biggest humanitarian donors on the Syrian crisis," Mogherini said, thanking Turkey for its efforts sheltering the refugees.

Turkey has been attempting to fill the requirements to join the EU since 2005, but political hurdles, the divided island of Cyprus and resistance to Turkish membership from some EU countries have slowed the process and relations have often been difficult.

However, a new president and prime minister in Turkey and a new European Commission in Brussels could lead to fresh dialogue and pave the way for regular high-level talks to discuss common strategic interests as top EU officials hope.