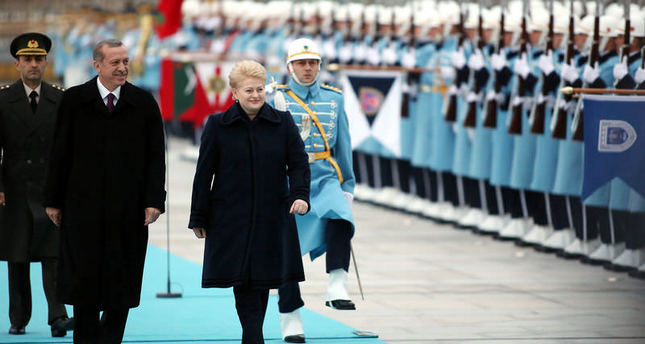 by Fatih Şemsettin Işık Dec 09, 2014 12:00 am
The Lithuanian President Dalia Grybauskaitė was on a visit to Turkey and met with President Recep Tayyip Erdoğan on Tuesday. Accompanied by two Lithuanian ministers and a Lithuanian business delegation on her visit, Grybauskaitė spoke of her country's support for Turkey's EU negotiation process.

After the meeting in which two agreements – the Memorandum of Understanding on Co-operation in the Field of European Integration and the Declaration on the Establishment of the Joint Economic and Trade Commission – were signed, Grybauskaitė and Erdoğan held a press conference. Indicating his pleasure with Grybauskaitė's visit, Erdoğan said it is a sign of relations with Baltic countries moving forward echoing the relations between the Ottoman Empire and the Grand Duchy of Lithuania.

Pointing to two countries' alliance in NATO and common perspective on many regional issues, Erdoğan said: "Turkey was among the countries that strongly supported Lithuania's NATO membership in 2004. Contributing to NATO Baltic Air Policing mission in 2006, our country still gives personnel and financial assistance to the NATO Energy Center of Excellence settled in Vilnius. I would also like to express our pleasure and gratitude for Lithuania's support to our EU membership process," and noted that the two agreements that were signed will reveal this support stronger and clearer.

Expressing her gratitude for Turkey's providing a substantive and permanent support for her country, Grybauskaitė said: "It is important to agree about combating the challenges in our region, to make a timely answer to them," adding, "Our targets are not easy to deal with." Emphasizing her country's support to Turkey's euro-integration process, Grybauskaitė said: "Turkey's EU membership process is an area in which Lithuania can be helpful. ... We are always ready to share our experience with the organization."

Last month, she praised Turkey's democratic and determinant attitude by stressing that Turkey is a country that has coped with crises and security issues in its region. "Turkey should have close relations with the EU because Turkey's membership will benefit both sides," she said.

Within the context of the Viking Project, Lithuania wants Turkey to be included, in contemplation of Derince (Kocaeli) and Samsun ports are convenient for the project. In the framework of the Viking Project, Lithuania aims to make the route between the Port of Klaipėda on the Baltic Sea and the Port of Illichivsk in Ukraine into a global logistic chain for the transportation of goods. Lithuania is also working to encourage the country to be used as a route for the exportation of goods coming from the Black Sea, Caucasus, Middle East and Far East to Europe.

To that end, during the visit of then President Abdullah Gül to Lithuania in April 2013, a memorandum of understanding was signed between the two countries.

Grybauskaitė's visit is the third visit by a foreign head of state to Turkey after Recep Tayyip Erdoğan assumed the presidential office.

Bilateral relations between Turkey and Lithuania are on a positive course. Lithuania's NATO and EU memberships have brought the two countries much closer in terms of common objectives and mutual cooperation. The total trade volume between the two countries reached $582.2 million in 2013 and Turkey became the most preferred tourist destination for Lithuanians.