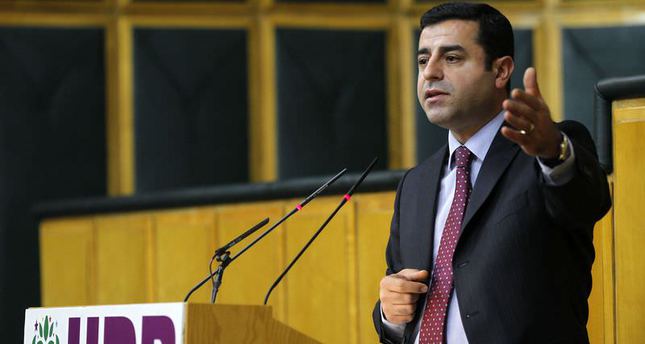 Tension between Ankara and the Peoples' Democratic Party (HDP) has begun to escalate once again after HDP Co-Chair Selahattin Demirtaş said that if the security package is approved in Parliament, the HDP will stand against the legislation by taking to the streets.

Prime Minister Ahmet Davutoğlu criticized Demirtaş for his "provocative" statements. The prime minister echoed his previous statement: "I am warning him again, if these calls continue, Demirtaş will be the only one responsible for every drop of blood that may be shed [in a possible Kurdish protest].

This is not the first time that the HDP has used street protests against Ankara. The deadly Kobani demonstrations on Oct. 6-7 began after the HDP leader called for street protest in an attempt to support Syrian Kurdish fighters in Kobani while accusing Ankara of not giving enough help to Kobani and supporting the Islamic State of Iraq and al-Sham (ISIS). The protests later morphed into fierce clashes between pro- and anti-PKK groups and nearly 40 people lost their lives.

Following the Kobani demonstrations, the government stalled reconciliation talks with the HDP to express that "when it comes to public order, the government will not tolerate irresponsible calls and anti-democratic acts" and proposed a security package to balance public order and the right to protest. Senior government officials stressed how the bill is important: "If we had enacted the bill before the Kobani incidents, dozens of people would not have lost their lives."

The stalled talks revived only weeks ago when Deputy Prime Minister Yalçın Akdoğan and a HDP committee met to show their determination over the reconciliation process, but the controversial security bill once again drove a wedge between Ankara and the HDP.

"[Demirtaş] should immediately halt these calls. If he is against the [security package] bill, he has the right to raise his voice in Parliament as a result of democratic politics," Davutoğlu added and that ensuring public order is the government's duty.

"Mr. Demirtaş must make a decision. This is an open call. [The government has] a strong will for reconciliation, but the process will not successfully come to a conclusion where there is no public order. If they disturb public order, the HDP will be adversely affected," he said.

Deputy Prime Minister Beşir Atalay said that Demirtaş's remarks are unacceptable: "All processes are definite in democracy. The HDP is a political party represented in Parliament."

Atalay argued that the only place the HDP has the right to oppose legislation is in Parliament and called the Parliament to comment within the scope of democracy.

Main opposition Republican People's Party (CHP) Deputy Chairman Akif Hamzaçebi said that if Demirtaş calls for street protest, it would be a mistake. He also criticized Davutoğlu's harsh statements against the HDP leader.

Hamzaçebi added that the CHP will continue its struggle against the legislation, but has no plan to take the streets.

HDP Diyarbakır deputy Altan Tan said in an interview conducted in October that his party had acted irresponsibly and echoed Demirtaş's sentiments that they had failed to accurately predict what was to come (in reference to the Oct. 6-7 Kobani incidents).

"We [the HDP] should have been more careful when calling on people to take to the streets. We should have considered what would happen after [the call]," the HDP deputy said.

When Daily Sabah called him to get his opinion over the latest "street protest" statements, he said that he would be able to comment within the next few days.

In an exclusive interview with a Turkish daily, Demirtaş criticized the security package and said that they will prevent the law from enactment with rallies and protests, and added they do not fear taking to the streets.

The mostly debated item that Demirtaş also stands against in the security bill is the change of the criminal code from "strong suspicion based on concrete evidence" to "reasonable doubt" giving authority to launch a search of a suspect's body, house or business.