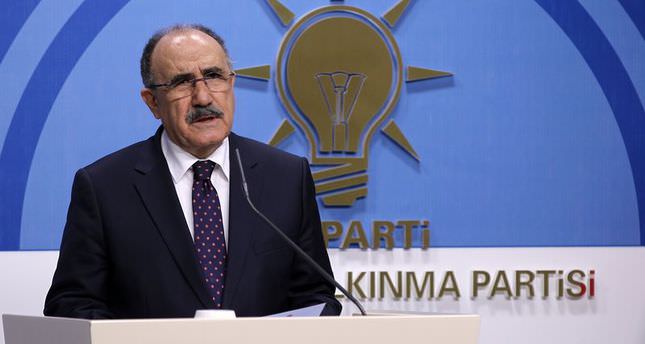 by Daily Sabah Dec 10, 2014 12:00 am
Justice and Development Party (AK Party) spokesman Beşir Atalay said that Ottoman is a Turkish language and claimed that the only difference between the two is that Ottoman is written with a different alphabet. He made the comments while criticizing the opposition for its stance during a press conference held at AK Party headquarters in Ankara.

Atalay said that the National Education Council, which took place last week, made around 200 important recommendations on all aspects of education. He criticized the main opposition Republican People's Party (CHP) for not paying attention to the recommendations and focusing instead on criticizing the teaching of religion and the Ottoman language in schools.

"The CHP negatively reacted to these issues because of their traditional nature," Atalay said and panned CHP Chairman Kemal Kılıçdaroğlu for his remarks claiming that teaching Ottoman in schools would indicate a return to the "Middle Ages." Atalay said such a stance was unacceptable and unsuitable for a political leader while claiming it represents a sign of ignorance.

"They do not know that Ottoman is, in fact, Turkish," Atalay claimed and that literary classics and history are all written in Ottoman. He argued that the only difference between Ottoman and Turkish is the fact that they are written in different alphabets, while he emphasized the fact that a significant majority of Turkish people are unable to read their history from primary sources.

Atalay argued it was not possible for the CHP to mend fences with Turkey's past and cultural traditions and that they were "programmed" to oppose any historical and religious ties to Turkey's 700-year history.

"Such expressions clearly indicate that they cannot renounce street violence," Atalay said and called on the HDP to adopt a more democratic stance regarding the issue of the new security package.

"The ultimate goal of the project is to ensure that violence is halted throughout Turkey and all issues are resolved through democratic and political means rather than violence," Atalay said.

The Ottoman language proposal was accepted by officials at the 19th National Education Council on Dec. 5. The decisions of the council, which is an advisory body, are not binding and are not necessarily implemented. President Recep Tayyip Erdoğan has openly voiced support for the measure.