Economy, not military, the priority for Turkish youth 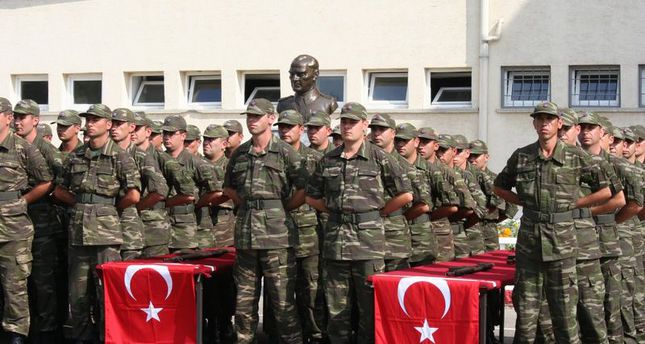 This regular slogan - pronounced proudly and loudly by your typical soldier in a Turkish barrack - faithfully translates the importance of the military in the Turkish identity.

The slogan resonates in the hearts of the Turkish public in a country that sees itself as an "army-nation" - something more than 70 percent think, according to a 2011 survey from the Istanbul-based Bilgi University.

And yet, Turkish youth have become increasingly reticent to enroll in the army.

"Personal interest has become more prominent for the youth instead of serving the country," Atilla Sandıklı, a retired senior colonel and chairman of the Istanbul-based think tank Wise Men Strategic Research Center, acknowledged.

The military service is increasingly seen not as a paramount national duty but as a job, he summarizes.

As evidenced by Prime Minister Ahmet Davutoğlu's announcement last Tuesday December 2 of an exemption to mandatory military service for a fee. Turkish men who are over 27 years of age will be eligible to pay an exemption fee to skip military service as of January 1, 2015. They will be required to pay TL 18,000 ($8,145) for the exemption.

Parliament passed the motion on Wednesday. There are about 600,000 young men eligible for the program.

Harun, a 29-year-old computer engineer, will most definitely take advantage of the exemption.

"I was working for four years and did not want to be cut off from the job market. Competition is intense in high-tech and you do not have luxury to take a long break," he says.

Such a comment in the past would have sparked outrage or have been considered an insult to "Turkishness," a vague term to define the quality or state of being Turkish. But, quite the contrary, several people have advised him to avoid military conscription and focus on his financial well-being.
The exemption to compulsory military service has garnered both praise and criticism.

Advocates of the measure have long argued that it would allow many people to continue their work and contribute to the economy.

The youth branch of the Independent Industrialists' and Businessmen's Association, or MUSIAD, greeted the announcement favorably, stressing that the exemption would lift a burden from many people's shoulders as they would have been faced with economic hardship had they been forced to leave their job for military service.

However, Kemal Kılıçdaroğlu, chairman of the main opposition Republican People's Party (CHP), criticized the move. "Those people who are well off will not perform military duties while the poor will," he said in a speech last week in Parliament.

An argument brushed off by Ozgur Niflioğlu, chairman of a platform that has long advocated for such an exemption to military service: "Life is not fair," he says matter-of-factly.

Harun also argues that the fee paid to gain exemption from the military will serve Turkey another way.

"The money will be spent to enhance the country's defense systems," he says. "At least, I serve the country by supporting development of those systems."

The government has introduced 10 similar military exemptions since the founding of the Republic in 1923.

Although, each time, the policies have ignited similar sentiments, this recent one has raised a question mark over the necessity of compulsory military service.

Turkey requires all male citizens from 20 to 41 years of age to perform mandatory military service. The duration of the service varies according to a person's education level. Those who hold a four-year university degree can complete the military service within six months while those without such a degree have to attend for 12 months. Additionally, those who are enrolled in higher education are permitted to delay the service.
"People join the army out of obligation," Harun says.

"A compulsory military service cannot function in this environment," Sandıklı says, adding that the army cannot do its job properly with low-skilled people. "A professional army is a must, not an option."

As it was legislating on the military service exemption, the government tried to boost interest for a professional army.

Indeed, it annulled an article requiring the completion of the mandatory military service in order to be eligible to become a professional soldier.

A Defense Reform Work Group, established by Turkey's previous president Abdullah Gül, which aimed to list recommendations for modernizing the military, echoed the need for a professional army.

"It is necessary to reform a compulsory military service system. A professional army should be the aim instead," the report published last August concluded.