Minister: Ottoman not compulsory for all, Alevism can also be taught 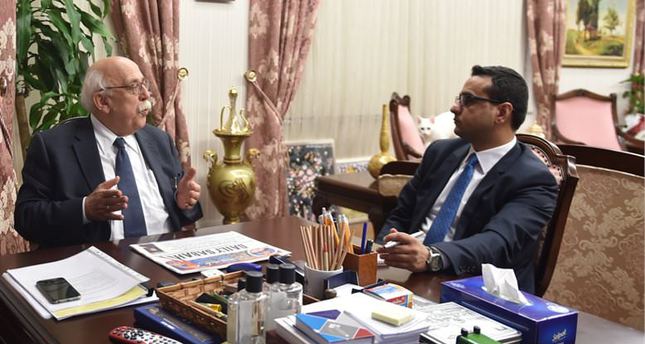 The government’s plan to introduce compulsory Ottoman language lessons is only for Islamic theology teaching İmam-Hatip schools, the education minister told Daily Sabah, adding that if people demand, Alevism can be taught as an elective lesson in schools

Turkey's National Education Council committee has completed its meeting, which is held every four years, last weekend and some of the council's recommendations, especially of teaching the Ottoman language and religious education sparked intense political debate. Speaking to Daily Sabah, Turkey's Education Minister Nabi Avcı underlined that most of the discussions were due to a lack of information and added that the debates have overshadowed the chronic problems of the educational system in Turkey.

Clarifying the role of the National Education Council decisions for the Ministry of Education's policy-making process, Avcı stressed that decisions have the characteristics of a recommendation and only a small proportion of the recommendation are implemented by the ministry. "National Education Councils are organized once every four years and so far a total of 19 council meetings have been held since the foundation of the Republic, including the one held last week. Throughout Republican history, only 2 percent of the recommendation decisions made at these councils were implemented by the ministry," Avcı said.

At the council meeting held last week, four fundamental issues were on the agenda: Increasing the quality of teachers, increasing the educational qualities of school administrators, measures to increase the physical conditions and security at and around schools and recommendations regarding new curricula proposals. A total of 179 recommendation decisions were made during the meeting. Among the other decisions, only three, adding the Ottoman language as a compulsory course, adding religious education courses in the first three grades of primary schools and abolishing the course of preparing alcoholic beverages and cocktails at tourism vocational schools have been widely discussed by the public.

Avcı claimed that these discussions were carried out with insufficient knowledge and added that discussions over the inclusion of Ottoman as an elective subject was not brought to the agenda, but only at the educational council meeting in Antalya. This is a topic that has been discussed for years and the recommendation is only related to the religious İmam Hatip high schools. "As the National Education Ministry, we have social science high schools where curricula mostly comprise social sciences and Ottoman has been taught at those schools as a compulsory subject for eight years. And at other schools, Ottoman is taught as an elective subject for five years. The council recommendation proposed teaching Ottoman as a compulsory subject at İmam Hatip high schools," he said.

Touching upon the matter of abolishing the course of preparing alcoholic beverages and cocktails at tourism and hotel management schools, Avcı said there is a mismatch between the practice and existing law and the recommendation attempts to solve this problem. "According to the existing legislation, those under 18 years of age cannot be involved in the production, marketing and presentation of alcoholic drinks. Those recommending this mainly target the accordance of the implementations in tourism schools to this law. As part of this recommendation, it is proposed to make regulations regarding the prevention of sending those underage into alcohol serving bars and including the tourism vocational schools into the scope of this law," he said.

Regarding the subject of adding compulsory religion and ethics courses to the first three grades of primary schools, Avcı stressed that from his point of view, religion and ethics courses are difficult for primary schools because they teach the principles of many different beliefs. "A child at that age can have difficulty understanding them. According to the U.N. Declaration of the Rights of the Child, parents are responsible for deciding on the educational matters of their children until they are 18. So alternatives should be presented for parents that would enable them to choose a belief system to be taught to their children." Avcı also gave in his opinion that parents might prefer their children to take or not to take religious education, however, the minister emphasized that according to the Constitution, religious classes are compulsory and constitutional reform is required to make this regulation.

"One of the most significant discourses of the AK Party [Justice and Development Party] for the 2015 elections is the new constitution. If we reach a majority that would allow the making of a new constitution in the next elections, we aim at making some reforms that would provide people with more opportunity to learn their own beliefs by omitting compulsory religious education from being a constitutional matter," he said.

"Everyone naturally wishes their belief to be covered more, so those regulations did not satisfy some groups. As the ministry, we point out that in these courses that are constitutionally compulsory in middle and high schools, there are also ethics lessons. In these lessons, Christianity, Judaism and other religions are taught along with Islam," he explained.

Touching on the subject of the European Court of Human Rights' (ECtHR) recent decision on religion courses, Avcı said that the ECtHR decision criticized that Alevi-Bektaşi culture is not covered enough at these courses, which has lost its validity now. "In order to answer the criticism, some extra units on Alevi-Bektaşi culture were added to course books. In the defense letter our ministry sent to the ECtHR, the latest developments in this subject were given," he said.

Avcı also said that they are ready to start lessons about Alevism as an elective course if there is demand. "Elective courses covering all beliefs could be opened. If such a demand exists, it is conveyed to the ministry and the demand is examined, but so far our ministry has not received such a demand. A demand wishing the teaching of Christianity did reach our ministry. The demand was examined. I approved the decision last month and from the next semester and this course will begin to be taught. We said that we are ready to help if the representatives of other religions have similar demands," Avcı said.

He called new reports alleging that mixed-sex education will end "serious disinformation" and underlined that news claiming that co-sex education would be abolished or prohibited are completely groundless and wrong. "As the ministry, we do not have such a consideration or an effort. This matter was not even discussed at the educational council since it is not on the agenda," he added.

Speaking on the matter of whether people disagree with President Recep Tayyip Erdoğan over teaching Ottoman, Avcı said that Erdoğan did not use the expression, "whether they like it or not," for the students. This expression was used for opposition parties. "This regulation will pass whether you like it or not."