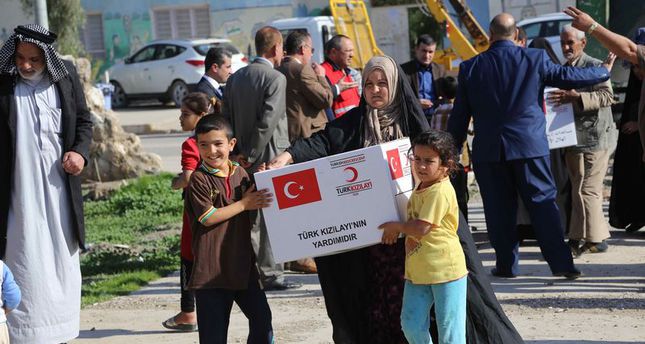 by AA Dec 12, 2014 12:00 am
The Turkish Red Crescent delivered humanitarian aid to 600 internally-displaced families in the capital of semi-autonomous Iraqi Kurdistan in northern Iraq.

The Bharka camp is located in Irbil, the capital of the Kurdish Regional Government in northern Iraq.


"There were 20 trucks bringing humanitarian aid from the Turkish Red Crescent, non-governmental organizations and donors. We were in Tuz Khurmatu and Kafeeri working on delivering aid the that Turkey provided to internally displaced persons," Lostar said.


"Turkey has shown its support to the Iraqi people since the start of the clashes. There are 200 Turkish aid trucks arriving in Iraq, and they are still arriving," Maaruf added.

Internally-displaced people have become a major problem in Iraq.


Ten thousand internally-displaced people were recorded on Monday by the Iraqi Ministry of Immigration and Migrants, which increased the official recorded number to 470,000.

Iraq has been gripped by a security vacuum since June, when the Islamic State of Iraq and al-Sham (ISIS) stormed the northern city of Mosul and declared a caliphate in Iraq and Syria.