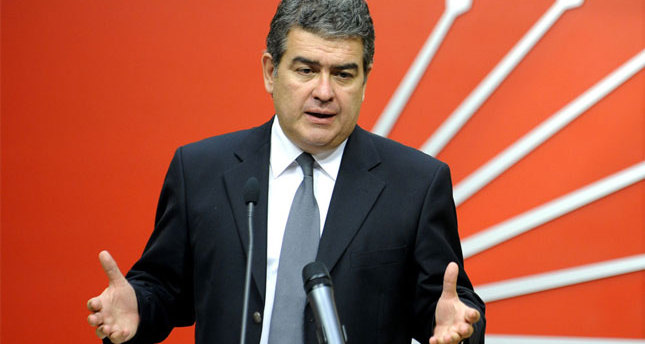 With six months left until the 2015 national elections in June, the storm within the main opposition Republican People's Party (CHP) has grown with a dismissal, heated debates, a resignation and raised voices by party dissidents.

CHP Chairman Kemal Kılıçdaroğlu said on Friday in a televised interview on HaberTurk, that dismissed CHP Eskişehir Deputy Süheyl Batum had no right to smear the CHP as a party member.

"We are one of the oldest parties in Turkey. An individual who is not a party member may criticize the party, but a party member has no right to speak about the party as freely as a citizen. The party has codes, regulations and principles, and party members should abide by those rules," he added.
This is the first time that a member has been dismissed from the party since 2010 when Kılıçdaroğlu took office.

The storm started when former CHP Ankara deputy and a renowned figure within the party, Emine Ülker Tarhan, announced her resignation due to the "weak and wrong policies and double standards" within the CHP. Backing up Tarhan's statement in November, Batum said Tarhan's resignation would not be the first and there are many dissidents who are suffering from the wrong policies of the CHP and are considering resignation. These remarks led Batum to be referred to the disciplinary committee and later dismissed from the party.

Batum, whose statement paved the way for his dismissal, said in November: "In one or two weeks, many of our friends [CHP members] will consider the party's condition."

Tarhan, who is now the leader of the Anatolia Party (AnaParty), slammed the CHP administration for dismissing Batum.

Tarhan, in hard-hitting words, said that the move to dismiss the deputy highlighted the weak understanding of democracy underpinning the party.
Upon the CHP's controversial decision to dismiss Batum for his remarks supportive of Tarhan's resignation, Tarhan directed sharp comments at Kılıçdaroğlu. Castigating the party administration for taking another anti-democratic step, she said she also found it odd to see the party pursuing trivial matters while the Turkish agenda is so busy.

Alluding to Kılıçdaroğlu, she also said an attempt was made to "behead" a member who had voiced opposition to an order, a reference to the old Sultan practice of ordering executions. She said Kılıçdaroğlu had no right to accuse some circles and structures of dictatorship, implying that he himself acts that way.

Meanwhile, Batum announced a day after his expulsion from the party that he will resort to legal means to prove the "injustice" he was subjected to.
"I will definitely go to court as the decision is blatantly against the law," Batum said on Friday.

He added he was not informed of the reasons of his dismissal, and that he will file a lawsuit demanding cancellation of the decision.

"I will also file a lawsuit against all members of the CHP Central Executive Board [MYK], including Kılıçdaroğlu, demanding compensation," he was quoted as saying.

Noting that he was having difficulty comprehending the grounds of the decision of the disciplinary committee, Batum spoke against the decision: "What have I done? Have I committed theft? Have I insulted anyone? Could criticizing be reason enough for dismissal? No. I must be able to understand what I have done."

Kılıçdaroğlu reiterated his previous statements that a certain group within the National Intelligence Organization (MİT) has been ordered to create trouble in the party and to weaken the party's image by alleging, "If we had no documents on it, we would not make such a claim."

In November Kılıçdaroğlu asserted that the MİT has been engaged in acts that will lead to division within the party including methods such as blacklisting some deputies.

Tarhan, in reference to Kılıçdaroğlu's allegation that a certain group within the MİT had been ordered to create trouble in the party and weaken the party's image, sarcastically asked if the MİT too was behind Batum's dismissal.

On Tarhan's resignation, Kılıçdaroğlu in the televised interview said, "This is not a loss for our party."

Chaos within the party started with the announcement of the CHP-Nationalist Movement Party (MHP) joint presidential candidate Ekmeleddin İhsanoğlu for the Aug. 10 presidential election. Many party dissidents alleged that the party administration did not ask for their opinion of İhsanoğlu's candidacy. Following the disappointment for the CHP in the presidential election in which Justice and Development Party (AK Party) presidential candidate Recep Tayyip Erdoğan was elected, an extraordinary party congress was held in September after reactions by party dissidents. It was also asserted that Tarhan would announce her candidacy for party leadership to compete with the current chairman, Kılıçdaroğlu, but these allegations were dismissed when CHP Vice Chairman Muharrem İnce announced his candidacy to run in opposition first, and these developments led to Tarhan's resignation. Kılıçdaroğlu, daring party dissidents, was re-elected chairman of the party and pledged that he would part ways with party dissidents and make the CHP a ruling party.

The conflict in the main opposition Republican People's Party (CHP) is not only between party dissidents and the party administration, but also in a CHP-dominated municipality. Accepted as the fortress of the CHP in Istanbul, the Şişli municipality also recently witnessed an administration debate. It was reported that Şişli Mayor Hayri İnönü, the grandson of Turkey's second president, İsmet İnönü, was forced to resign by former Şişli Mayor Mustafa Sarıgül's son Emir Sarıgül, who was appointed deputy mayor when İnönü was elected mayor.

Mustafa Sarıgül has been Şişli's mayor for a long time and has a dominating power in the Şişli mayoral administration. Leaving the CHP about 10 years ago and transferring to the Democratic Left Party (DSP) due to internal rivalry in the CHP, Mustafa Sarıgül returned to the CHP and announced his candidacy for the CHP's Istanbul Metropolitan Municipality race in the March 30 local elections. He did not manage to get elected, but the CHP received most of the votes of Şişli residents and İnönü was elected mayor of Şişli.

Following the election, Sarıgül was appointed deputy mayor. It was alleged that Sarıgül threatened and forced İnönü to resign in a phone call and regarding the allegations, İnönü said he would neither deny nor would confirm them, implying that there is a debate between them. It was reported that CHP deputies in Şişli's municipal council have chosen 10 representatives to convey their dismay about İnönü, who allegedly "does not work and does not reach out to the people." The representatives are expected to contact CHP Chairman Kemal Kılıçdaroğlu or Veli Ağbaba, who is responsible for local administration affairs, and explain that İnönü is not fulfilling his duties as mayor. According to İnönü, Kılıçdaroğlu showed him support.