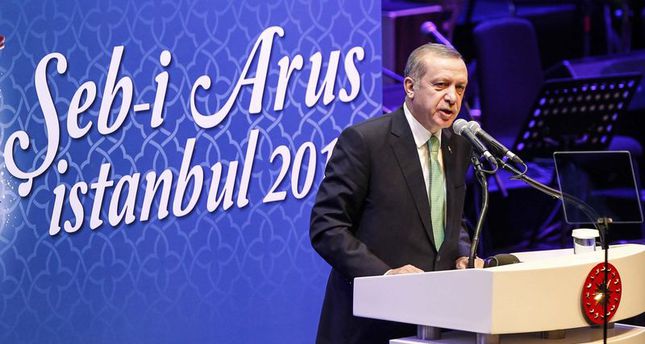 by AA Dec 13, 2014 12:00 am
President Recep Tayyip Erdoğan emphasized the important role of 13th-century Sufi mystic and Islamic scholar Mevlana Jalal ad-Din Rumi's doctrines in the formation of the Anatolian civilization, in a commemoration speech on Saturday.

"This civilization has fought with many internal and external enemies and was able to keep standing after a number of battles. We have arrived to these days thanks to the seeds of love that believers like Mevlana sowed," Erdoğan said in an address in Istanbul to commemorate the 741th anniversary of Rumi's death.

"Our concern is to guarantee the welfare of these (Anatolian) territories and handing over the treasures of our ancestors safely to future generations," Erdogan said.

"Our direction, our prayers and our Prophet Mohammad are one and we will walk these roads together," he said.

Erdoğan will be in central Konya province on Dec. 17, the last day of the Mevlana commemorations.

Rumi was a prominent 13th century scholar and poet. His Masnavi, an extensive series of poems about being in true love with God, is one of Anatolian culture's most important works.
Last Update: Dec 13, 2014 11:22 pm
RELATED TOPICS