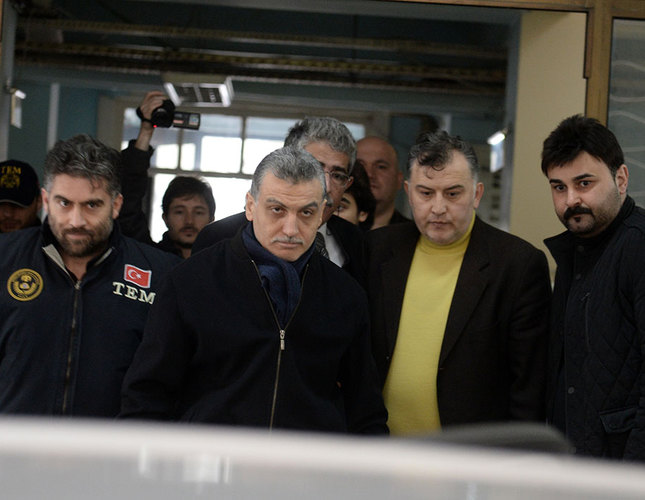 Twenty-five people, including police officers and media staff having alleged links to the Gülen Movement, were detained in operations carried out by the Public Prosecutor of Istanbul in 13 provinces on Sunday. According to the prosecutor's statements, the operations were carried out for involvement in establishing an armed terrorist organization and fabrication of crimes under the scope of a terrorist organization.

Police forces carried out simultaneous operations in numerous provinces as part of an operation launched against Gülenist suspects including those who work at the Zaman daily and Samanyolu channel.

It was earlier reported by media outlets that over 30 detention warrants have been issued for the suspects. The prosecutor's office released a press statement later in the day and announced the names of 31 suspects related to the case.

Hidayet Karaca, the president of Samanyolu Broadcasting Group, was detained early in the day.

Ekrem Dumanlı, the editor-in-chief of the Zaman daily, was also detained later in the day. Dumanlı has previously stated that he was called to appear at the prosecutor's office to give testimony.

Dumanlı spent the night at Zaman's headquarters instead of his home and refused to go to the Istanbul Police Department. As the police came to arrest Dumanlı, the whole scene was turned into a show and broadcast live on various TV channels.

Two people, including a director and a scriptwriter, were detained in Eskişehir province while filming a TV series for Samanyolu TV. Other cities where operations were carried out include Ankara and Van, where suspects were transferred to Istanbul after going through health checkups.

The date of the operation and the list of the possible suspects were earlier released by the "FuatAvni" Twitter account, which is presumed to have ties with Gülenist circles.

It was reported that people already detained and those expected to be detained are accused of fabricating crimes and evidence and plotting against a group referred to as "Tahşiyeciler."

In 2010, an operation was carried out against Tahşiyeciler, and a total of 11 people were detained while Mehmet Doğan, a senior member of the group was imprisoned for 17 months. Doğan, who was also known as "Molla Muhammet," was allegedly against some of the ideologies of Fethullah Gülen, the leader of the Gülen Movement.

One of the most important pieces of evidence in the ongoing operation came from a raid on an alleged terror cell affiliated with the Tahşiye group. Fingerprints of police officers carrying out the operation were found rather than the fingerprints of alleged suspects.

An audio recording was leaked early this year of a conversation of Gülen himself approving the scripts read by Hidayet Karaca for the "Şefkat Tepe" TV series on the Samanyolu TV channel.

Security measures were tightened in the Istanbul Police Department and Istanbul Justice Headquarters.

Some protesters against the operation gathered in front of Justice Headquarters and Zaman's headquarters.

The police did not raid the headquarters of the Zaman daily and Samanyolu TV according to reports.

In response to the operation, Deputy Prime Minister Numan Kurtulmuş stated that they are waiting for the results of the investigation, while Mehmet Müezzinoğlu, the minister of health, said that those who commit crimes would be held accountable before the law.

Members of the Gülen Movement allegedly infiltrated Turkey's police and judiciary with the aim of toppling the government, and the government has pledged to remove "traitors" through democratic and lawful means.