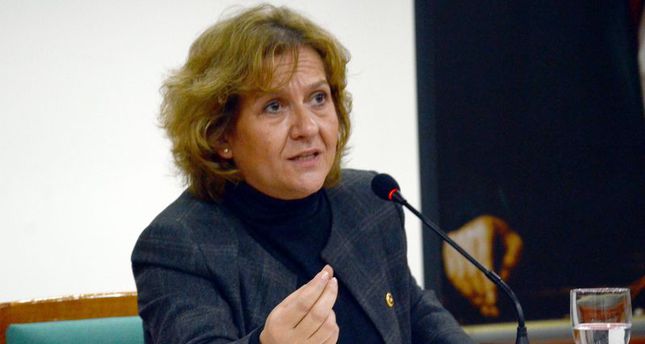 Güler made the statements at a conference entitled "What should be done for the future of the Turkish Republic and the Turkish nation" held in the city of Kastamonu with the participation of non-governmental organizations.

"Despite the party administration's denials, CHP has cooperated with the Gülen Movement during the March 30 local elections" said Güler.

Mustafa Sarıgül, who ran as CHP's candidate to become Istanbul's mayor during the local elections has said "There is huge cruelty and injustice against the Gülen Movement" while speaking on a televised interview about the local elections.

Güler also criticized Mehmet Bekaroğlu's incorporation to the party. She claimed that Bekaroğlu, who was previously a member of far-right Felicity Party (SP) had become a co-chair of the party through controversial means as he was added to the party through the female quota, contravening the party statute. She added that the gender quota is implemented for the disadvantaged women, but this had been exploited by the party.

Elaborating on CHP's intolerant stance against criticism, Güler claimed Bekaroğlu started to dismiss party members when he realized neo-nationalists would not resign. She referred to the dismissal of Eskişehir Deputy Süheyl Batum, who spoke out against CHP Chairman Kemal Kılıçdaroğlu and party administration policies. Batum has been dismissed from the party following his referral to its disciplinary committee.

Güler also argued that the party was cooperating with the pro-Kurdish HDP and said this was problematic, despite Chairman Kılıçdaroğlu's claims that the HDP was forming an alliance with the AK Party.

Recently, HDP's Hakkari Deputy Adil Zozani has called CHP to form an alliance with his party. "Let us come together under the same umbrella and embrace Turkey to form a truly democratic government" said Zozani, who said the name of the new party could be Democratic Republican Party. He refuted allegations that the HDP was cooperating with the AK Party prior to the 2015 General Elections.

Intra-party chaos began with the nomination of joint presidential candidate Ekmeleddin İhsanoğlu in cooperation with the right-wing Nationalist Movement Party (MHP) for the August 10 presidential elections. Many party members argued that the party administration did not take into consideration the opinions of party members and nominated İhsanoğlu in an undemocratic manner.

After the joint candidate's loss of presidential elections, the party held an extraordinary congress in September to choose a new leader, which resulted in Kılıçdaroğlu being re-elected while Emine Ülker Tarhan, a prominent neo-nationalist member of the party resigned and formed her own party calledAnatolia Party (AnaParty). She released a bitter press statement regarding her resignation in which she blamed the CHP's administration for their "wrong and weak policies," which she said are not representative of the people's sentiments and were not made with winning elections in mind.