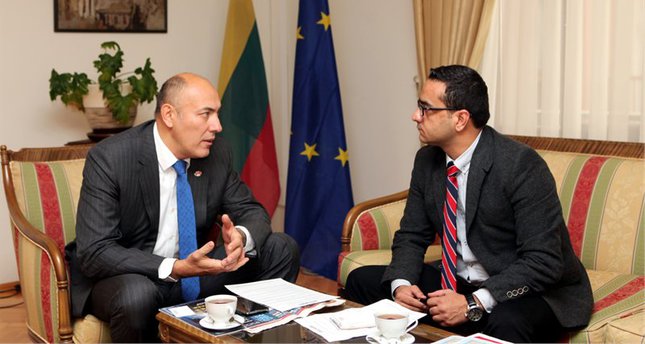 Turkey and Lithuania have always enjoyed good relations and now we are looking forward to extending our cooperation in different areas.

Despite the geographical distance between Turkey and Lithuania, the relationship between the two countries has historical roots and both countries have enjoyed problem-free affairs for centuries. The growing momentum in bilateral relations has strengthened after Lithuanian President Dalia Grybauskaitė visited Turkey last week. As Daily Sabah, we spoke to Lithuanian Ambassador HE Mr. Kęstutis Kudzmanas about the future of the bilateral relations, areas to cooperate, Turkey's EU bid and the Viking Project.

Last week Lithuanian President Dalia Grybauskaitė paid a visit to Turkey. What is the importance of this visit for Lithuania?

There are several areas that our countries continue to cooperate in harmony. Firstly we have been a member of NATO since 2004 and Turkey actively contributed to the protection of the air spaces of Baltic countries by providing its four F-16 jets for NATO's Baltic Air Police Mission in 2006. Moreover, Lithuania's EU membership has brought the two countries much closer in terms of common objectives and mutual cooperation.
In 2013 during the visit of former President Abdullah Gül to Lithuania, a memorandum of understanding agreement to establish Joint Economic and

Trade Commission (JETCO) was signed between the two countries. During her official visit to Turkey last week, President Dalia Grybauskaitė attended the Lithuanian-Turkish business forum. A delegation of 22 business representatives from Lithuania participated in the forum, the main purpose of which is to strengthen bilateral business relations and explore new opportunities and spheres of cooperation.

During the visit the president of Lithuania noted that Turkey was an important ally of Lithuania and NATO, contributing in a significant way to the stability of the whole region. Both countries face similar security challenges; therefore they support each other's efforts to ensure their own security and the security of entire Europe. Turkey backed Lithuania's aspiration for the long-term collective defence guarantees at the NATO Summit in Wales. This country actively participates in the work of the Vilnius-based NATO Energy Security Center of Excellence and contributes to the air policing mission in the Baltics.

During the conference President Erdoğan said that to sign agreements with Baltic countries is moving forward, echoing the relations between the Ottoman Empire and the Grand Duchy of Lithuania. From the historical perspective, how would you evaluate the current level of relationship?

As President Erdoğan says the relationship between our countries has historical roots. The Ottoman Empire and the Polish-Lithuanian Commonwealth were direct neighbors from the late Middle Ages until the end of the eighteenth century. The year 2014 marks the 600th anniversary of the establishment of unbroken diplomatic relations between Turkey, Poland and Lithuania. Therefore it can be said that Turkey and Lithuania have always enjoyed good relations and now we are looking forward to extending our cooperation in different areas.

Turkey is the world's 16th largest fast-growing economy whose reliable market with 80 million consumers is an excellent opportunity for the Lithuanian business. This is especially important now when Lithuanian businesses are looking for new stable markets for their goods and services. There are continual possibilities for advancing collaboration in the food industry, services, transport sector, biotechnologies, and laser manufacturing.

Turkey's EU membership process is an area in which Lithuania can be helpful. We are always ready to share our experiences with Turkey. The EU negotiations process was painful for us, to adopt all the EU rules and regulations was difficult moreover we had to close some industries but we managed to successfully pass through that stage and I think we can help Turkey with our experiences in this field.

After almost years of stagnation Turkey opened a new chapter of negotiations during the Lithuanian EU presidency and hopefully our neighboring country Latvia can have such success during their presidency.

As you know there is an international transport project called "Viking" and Lithuania is one of the big stakeholder of this project. Could you please further explain this project ? What does it mean for regional stability?

The "Viking" a Lithuanian international transport project was launched in 2003. This is an international container shuttle train service that connects ports in the Baltic Sea and the Black Sea and connects Asia with the Baltic Sea. The project aims to turn the route between the Port of Klaipėda on the Baltic Sea and the Port of Illichivsk in Ukraine into a global logistic chain for the transportation of goods. The Ukrainian, Belarusian, Lithuanian, Bulgarian, Romanian, Moldovan and Swedish railways have already joined for the project and it's the most efficient and quickest way to transport goods from the Black Sea to the Baltic Sea and distribute throughout Europe.

This project also has great importance in terms of regional cooperation and stability. Because Viking is not only a railway, ports and logistics companies' project, but also an example of constructive political collaboration between participating states. During the 10 years of train shuttling, the relations between initiators and founders of the Viking project have been established and are constantly developing with more countries and more transport-related companies joining the project.

In 2013 Lithuania's Transport minister and Turkish counterpart signed a Memorandum of cooperation regarding the Viking project. What are the latest developments in this field?

As you said in May 2013 Transport minister of our countries signed a Memorandum of cooperation and Turkey joined the combined transport train Viking project. Since that time Lithuania found Turkish companies to work within the project. In the next few months a new agreement regarding technical procedures and tariffs will be signed.

Firstly we represented the Viking project and now Turkey is closely interested in the project and I believe that our cooperation in this field will continue to increase.

The "Viking" project will especially increase its importance after the completion of the Baku-Tbilisi-Kars railway section, which will then increase transit cargo flows from China to Europe by TRACECA route. Having reached Turkey, the cargo will be distributed. The cargo will reach Europe by southern route; part of it will be directed to Central and North European countries. We are to show the Turkish operators that we are ready to transport cargo with the "Viking" route on attractive conditions. Even now we are to put efforts in taking over the cargo flows from the countries of the Baltic Sea region to the countries of the Black Sea region and via Turkey – to the countries of the Mediterranean Sea region. It is necessary to work not only with logistics companies but also directly with the big producers both in Scandinavia and Turkey. Our competitors from neighboring countries are on the same way actively promoting alternative routes. Therefore, it is necessary to increase the attractiveness and visibility of the train 'Viking'.

Comparing to the alternative routes proposed by the neighboring countries, 'Viking' is the quickest and cheapest cargo transportation option from the countries of the Baltic Sea region to Turkey.

Yes that is right, Turkey is the most popular touristic destination for Lithuanian people and every other person in our country visited Turkey. Over a period of 20 years (between 1992 and 2012) one million Lithuanian people visited this country.

For Lithuanian people Turkey is a very convenient place to go and there is a direct flight from Vilnus to Istanbul five times a week and there are also additional flights to holiday destinations during the summer time.

On the other hand there about 10,000 Turkish tourists spent their holidays in Lithuania last year and we are looking to double this figure. Moreover, this year, Turkey joined Lithuania in its worldwide virtual amber road initiative developed together with the United Nations World Tourism Organization, which is also worth being mentioned in the field of tourism.