PM: KCK’s threats nothing Turkey will pay attention to 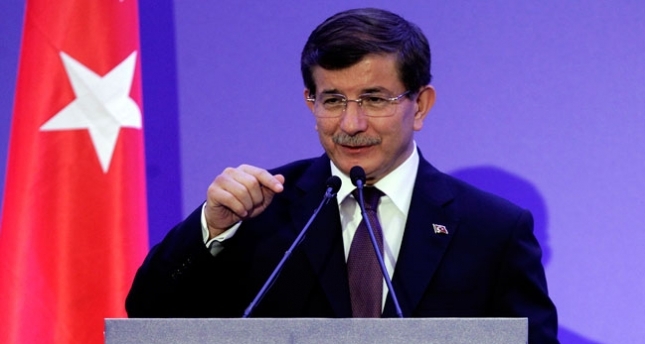 by Daily Sabah with AA Dec 15, 2014 12:00 am
Commenting on a senior member of the Kurdish Communities Union (KCK) – an umbrella organization that includes the PKK – threat to the government that he w sharing PKK leader Abdullah Öcalan's draft peace proposal with the media, Turkish Prime Minister Ahmet Davutoğlu said blackmail and threats would only harm the reconciliation process and is not something that the government would pay attention to.

Following a delegation of pro-Kurdish Peoples' Democracy Party (HDP) visiting KCK seniors at the PKK hideouts in Qandil Mountains bordering Northern Iraq, a senior KCK member said the government should immediately allow a delegation to visit Öcalan on İmrali Island, where he is imprisoned.

If the demand is not met, the organization will release the PKK leader's draft reconciliation proposal that was accepted by the seniors in Qandil. "Whatever this process seeks, we'll do that. Using a threatening and blackmailing tone would harm the process and it is not an attitude that we would accept," he said.

The reconciliation process is advancing positively and no one will be able to disturb this process, the country's president, Recep Tayyip Erdoğan said. Addressing Turkish businessmen on Friday at the new presidential palace in Ankara, Erdoğan said: "The people, especially of our southeastern regions, are not giving credit to those trying to disturb the process, including that party claiming to defend the rights of Kurds."

"Those who threaten this process with taking to the streets or with restarting guerilla fighting are not respected any more in Turkey," Erdoğan said.

The leftists and HDP have said they will oppose new legislation on domestic security – should it be approved in Parliament – and call for street protests.

Pro-Kurdish protesters poured to the streets across the country in late October under the pretext that the Turkish government was allegedly doing nothing to halt the advance of extremists pouring into the Turkish-Syrian border town of Kobani. Dozens of people were killed in the street protests.

The new law announced by the government would enable security forces "to prevent crimes" without waiting for a search warrant from the public prosecutor, according to Prime Minister Ahmet Davutoğlu.

The leftist HDP is an offshoot from another pro-Kurdish party, formed in 2013 with the aim of winning broad support across Turkey contrary to previous Kurdish parties which had a strong voter base located in eastern Turkey.

"The HDP has to first clean its hands from the blood they spilled during the October events [for Kobani]," Erdoğan said Friday.

Erdoğan also addressed the criticisms of the opposition concerning "overspending" on the construction of the new presidential palace in Ankara, known as the "White Palace."

"This week U.K. Prime Minister David Cameron visited our country. They are restoring the Westminster Palace, spending a total $5 billion. Our total spending is $650 million. Do we witness any fuss in the U.K.?" Erdoğan asked.